Money matters: The world's largest banknote is now on show in Dubai

Larger than an A4 sheet of paper, the massive note is worth around Dhs145,000

The bigger the wad of cash, the more it’s worth, right? Well, how about if you had just one note, larger than an A4 piece of paper, how much do you think that would be worth?

Around Dhs146,000 it turns out. Specifically, we’re talking about a 100,000 peso note printed by the Philippine Central Bank in 1998 to commemorate 100 years of the country’s independence from Spanish rule.

Measuring in at 35.6cm by 21.6cm, it’s not the sort of thing you could easily slip into a money clip, let alone a wallet, and is officially classified by the Guinness Book of World Records as the world’s largest banknote. 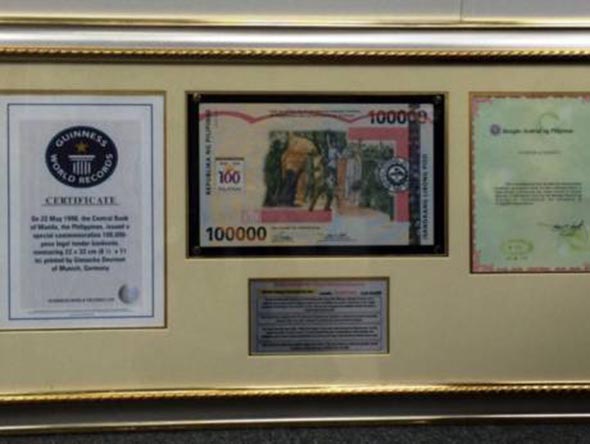 Only 1,000 of the commemorative currency were ever issued, and one has found its way to Dubai where it is now on show at Numisbing, a coin collector’s centre in Deira.

Originally sold to collectors for Dhs180,000 pesos (around Dhs15,500) each, the note is now estimated to be worth nearly ten times that amount.

Speaking to Gulf News, the banknote’s owner, who is also the founder of the centre, hopes that it will be of special interest to many of the city’s large Filipino community who are celebrating their Independence day today.