Need a culture fix? You can check out awesome art in these Abu Dhabi hotels

If you thought hotels were for just resting your head, grabbing a bite and being pampered, then it’s time to think again. Some of Abu Dhabi’s biggest have opened up spaces for the region’s finest painters, sculptors and photographers to display their work. These art-savvy properties are showcasing pieces in their lobbies, rooms and restaurants, while some are going as far as creating dedicated gallery areas. Here’s five hotels where you can see awesome pieces of art this weekend…

01.) Bronze works and pop culture at the Four Seasons 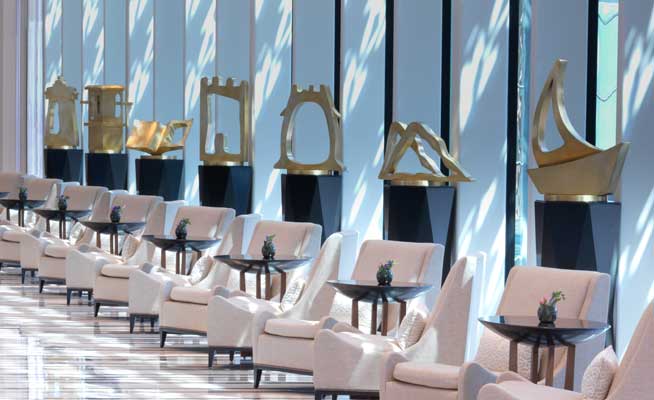 With more than 2,000 pieces from local and international artists on display – many of which have been commissioned just for the hotel – the Four Seasons is a great place to check out a diverse range of art. In the lobby, you’ll find an incredible cast bronze sculpture by local Emirati artist Ashwaq Abdulla. Titled Seven Sculptures, to represent each of the seven emirates, viewers can get a glimpse into the heritage of the UAE with key landmarks including Umm Al Quwain Fort, Jebal Jais Mountain in Ras Al Khaimah and the Quran roundabout culture square in Sharjah on display. 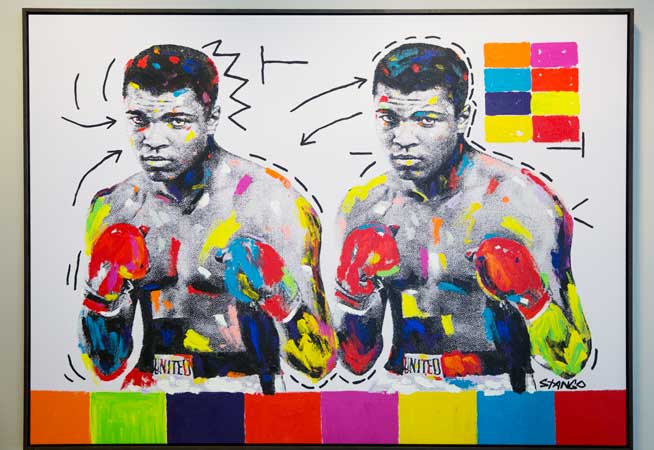 Going beyond the intent of mere decoration, the art collection at Rosewood Abu Dhabi features more than 280 pieces scattered throughout the hotel. Blending Eastern and Western contemporary works of art, the Rosewood showcases local, regional and international artists. You’ll find it hard not to be drawn to San Francisco-based artist Damon Hyldreth’s polished cast bronze sculpture when you enter the lobby of the hotel – the huge piece has been commissioned just for the Rosewood and is eye-catching to say the least. 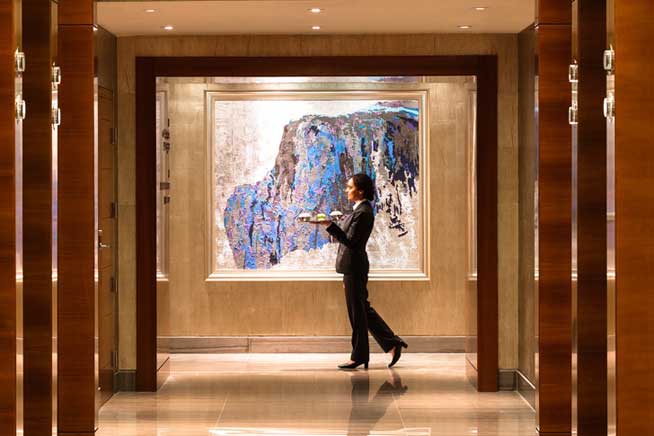 Head towards the hotel’s elevators and you’ll see the work of New York-based gemstone painter Fareen Butt in the corridor. Her Mirage Half Dome 1.1 is just one painting from The Mirage Series and is made from crushed gems and precious minerals such as aquamarine, platinum and sapphire. Born in Toronto to an Afghan mother and a Kashmiri father, she studied as an apprentice for jewellery designers in Islamabad and Rajasthan – the birthplace of gemstone painting. Inspired by famous landscapes, mountains and sunsets, it is based on an abstract depiction of Half Dome, a famous mountain in Yosemite National Forest in California.
Rosewood Abu Dhabi, Al Maryah Island, Abu Dhabi, Sun to Sat, free. Tel: (02) 8135550. Taxi: Rosewood. rosewoodhotels.com/en/abu-dhabi

A beacon of culture for art aficionados in Abu Dhabi, Le Royal Méridien plays host to a variety of exhibitions throughout the year and the best part is you can take it all in for free. Its latest collection showcases the works of renowned Lebanese sculptor, poet and artist Rudy Rahme. A Guinness World Record holder, Rahme is known for creating the largest wooden sculpture in the world. 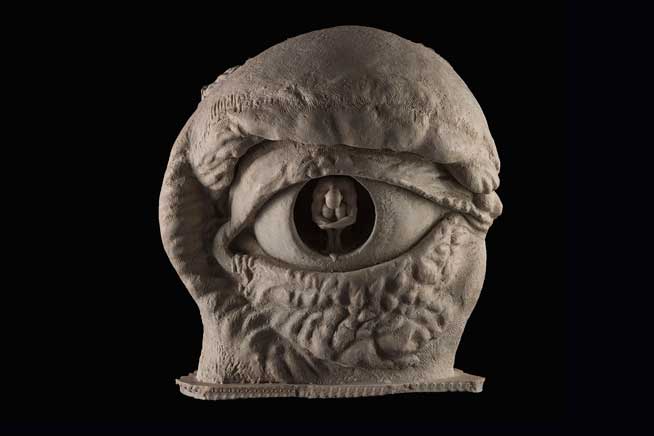 In this exhibition, discover Rahme’s artistic genius through the Walking Rock Tour, which is on display in the hotel’s lobby until the end of Ramadan. With 23 sculptures on show, viewers will get the chance to see unique pieces from the artist’s personal atelier in Lebanon such as The Dream Sculpture, a massive marble sculpture of an eye with a human figure inside the pupil.
Le Royal Méridien, Al Markaziyah, Abu Dhabi, Sun to Sat 9am to 10pm until the end of Ramadan, free. Tel: (02) 6742020. Taxi: Le Royal Méridien. leroyalmeridienabudhabi.com

Australian artist Des Spencer started his professional career as an artist in the late 1980s and his worked has been displayed all over the UAE. He moved to Abu Dhabi in 2016, but before then lived in Sharjah and his work has been exhibited at several hotels in the capital (including the InterContinental, the Sheraton Abu Dhabi, Qasr Al Sarab and Le Méridien), plus at several hotels in Dubai, such as Anantara The Palm and Jumeirah Creekside Hotel. He’s also gained audiences in the Maldives and all over Australia. 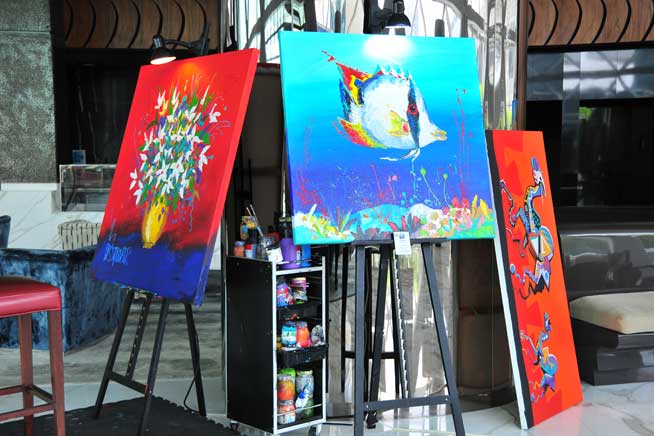 His work on display in the nation’s capital has a UAE theme running through it. Particular highlights include his Formula One racing car acrylic paintings, plus his colour images of camels and tranquil desert landscapes.
Hyatt Capital Gate, Al Sarafat, Abu Dhabi, Sun to Sat, free. Tel: (02) 5961234. Taxi: Next to Adnec. abudhabi.capitalgate.hyatt.com 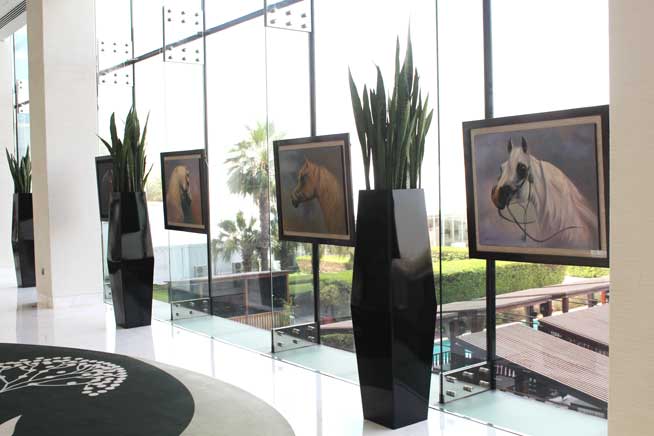 When it comes to exhibitions, the Fairmont Bab Al Bahr is at the forefront of the capital’s art scene. Having hosted several events since its opening in 2009, including the annual No White Walls initiative, the hotel is a committed supporter of culture in the city. Currently on display is Mary Arts, an exhibition by Syrian artist Hicham Wadee Adwa. The collection is a mix of Adwa’s works as well as paintings from his personal collection, which he has been gathering for the past decade. It will feature his favourite Syrian artists including Abdullah Abu Asali, Mansour Alhenawi and Issam Alshater. The 40 acrylic-on-canvas works give viewers an insight into the traditions and heritage of the UAE, displaying images of old forts, horses, local jewellery and more, and are particularly fitting for Ramadan.
Until August 31
Fairmont Bab Al Bahr, Khor Al Maqta, Abu Dhabi, Sun to Sat, free. Tel: (02) 6543333. Taxi: Fairmont. fairmont.com/BabAlBahr