The incident occurred at 5am on Sunday…

In the early hours of Sunday morning, police responded to an incident involving a car that had become stranded on the Dubai Tram line opposite Marina Mall.

According to The National the vehicle had veered off Al Marsa Street at a junction at around 5am and travelled 500 metres before coming to a stop opposite the shopping complex.

A member of a closed Facebook group managed to capture photos of the incident as it unfolded and in the image below you can clearly see the car stranded on the tracks near the Marina Mall station. 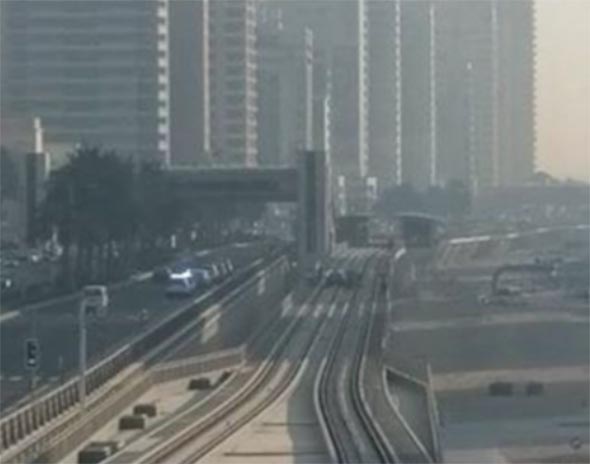 The incident was confirmed in a statement from Colonel Saif Muhair Al Mazrouei, director of the traffic department at Dubai Police, who noted that officers arrived at the scene quickly and had to use a crane to lift the car off the tracks before the public transport service opened to the public at 6.30am.

There were no reported injuries or disruptions to the tram service, but police are said to be pursuing legal action against the driver.

ALSO READ
*Complete lowdown on Dubai Tram, including five things to do at each stop*
*The Palm just got a brand new monorail station*

This is not the first incident in which a car has run afoul of Dubai Tram. Back in September 2015, a motorist crashed into a tram after jumping a red light on Al Sufouh Street leading to a Dhs3,000 fine and them being jailed for one month.

Violations for disrupting tram services in Dubai are harsh (understandably so) and can range from up to Dhs15,000 and revocation of license for jumping a red light at a tram intersection, to Dhs30,000 for causing an accident with a tram that involves a fatality.

News
EDITOR’S PICKS
Ramadan in Dubai: 40 iftars to try
READ MORE
Where can Dubai residents travel? Check out these 14 destinations
READ MORE
Rumours, facts and reveals: New Abu Dhabi bars and restaurants
READ MORE
UAE announces reduced working hours for Ramadan 2021
READ MORE
MOST POPULAR
20 places to enjoy culture and history in Abu Dhabi
3 mega-venues opening in Dubai that you need on your radar
6 fun things to do in Abu Dhabi this week: April 18 to 21
Book an unforgettable escape to Mӧvenpick Resort Kuredhivaru Maldives
Review: Is Lucky Fish worth its salt at West Beach?
YOU SHOULD CHECK OUT
Our website uses cookies and other similar technologies to improve our site and your online experience. By continuing to use our website you consent to cookies being used. Read our privacy policy here.