Uptown Dubai is a new district scheduled to open near JLT

It will have two iconic super-tall towers, as well as over 200 retail outlets…

Forget Downtown Dubai, there’s a brand new commercial and residential district due to begin construction later this year and it’s called, you guessed it, Uptown Dubai.

Operated by Dubai Multi Commodities Centre (DMCC), the project is located within walking distance of JLT and will feature more than 200 retail outlets and restaurants, as well as 3,000 residences, across 10 million square feet.

No renders or images of what the area will look like when completed, but the developers are promoting it as the new “Hotspot of Dubai”, labeling it a “premium district”.

The focal point of the area will be two super-tall towers designed by architects Adrian Smith and Gordon Gill (who are also behind the 1km Kingdom Tower currently under construction in Jeddah), as well as several luxury hotels.

A two-level central plaza, that DMCC is saying will be larger than Times Square in New York, will sit atop the area’s main podium, 28 metres above ground, and house retail outlets and a mall, as well as provide direct access to both towers.

But wait, wasn’t there already meant to be something else being built in that spot?

That’s right, the 700 metre Burj2020 tower, originally announced in 2015, was scheduled to be built on this exact spot but it looks like plans have changed.

While that particular building was expected to be completed by 2020, we’re instead now getting two iconic towers (the height of which have yet to be revealed) with phase one and two of the project set to be underway by the end of 2017.

There’s no word yet on when the project is to be completed.

Google Maps shows an entry for Burj2020 where Uptown Dubai will now take its place: 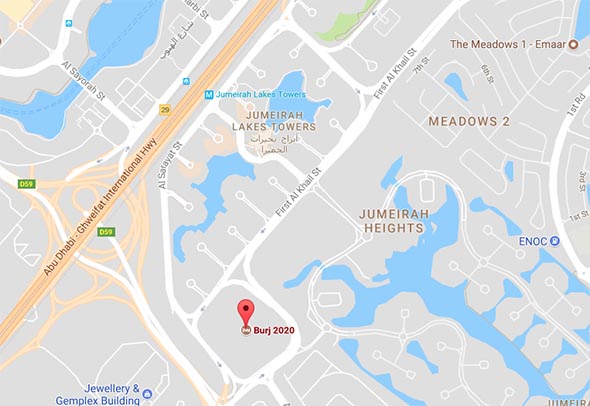 Culture
News
EDITOR’S PICKS
Ramadan in Dubai: 48 iftars to try
READ MORE
Where can Dubai residents travel? Check out these 14 destinations
READ MORE
Rumours, facts and reveals: New Abu Dhabi bars and restaurants
READ MORE
UAE announces reduced working hours for Ramadan 2021
READ MORE
MOST POPULAR
The UK and eight other countries added to Abu Dhabi Green List
Breaking: Flights from India to UAE suspended for 10 days
A sweet new Japanese restaurant has opened in The Greens
Book a Yas Hilton Ramadan stay and play package from Dhs396pp
There's a cool new coffee shop to check out in Dubai
YOU SHOULD CHECK OUT
Our website uses cookies and other similar technologies to improve our site and your online experience. By continuing to use our website you consent to cookies being used. Read our privacy policy here.