Dubai Marathon 2018: Here's what you need to know

It’s the world’s richest race: Dubai Marathon is back this weekend.

Whether you’re lacing up your trainers or warming up your vocal chords as part of the cheering crowd, there’s no denying the annual Standard Chartered Dubai Marathon is a big deal. And this year, it takes place on Friday, January 26.

The 42km race is long and arduous, but the flat route, which runs the length of Beach Road and back, makes it one of the fastest marathons in the world. So expect to see some elite runners trying to break records.

WHERE DO THE RACES START & FINISH?

The marathon, which starts at 6am for elite racers and 7am for the main marathon runners, and the 10km road race (which starts at 9am) both start on Umm Suqeim Road, opposite the Madinat Jumeirah.

The 4km fun run (11am) will start just around the corner at Umm Suqeim Road on Al Sufouh, opposite the Madinat Jumeirah.

All races will finish at the Dubai Police Academy end of Umm Suqeim Road. 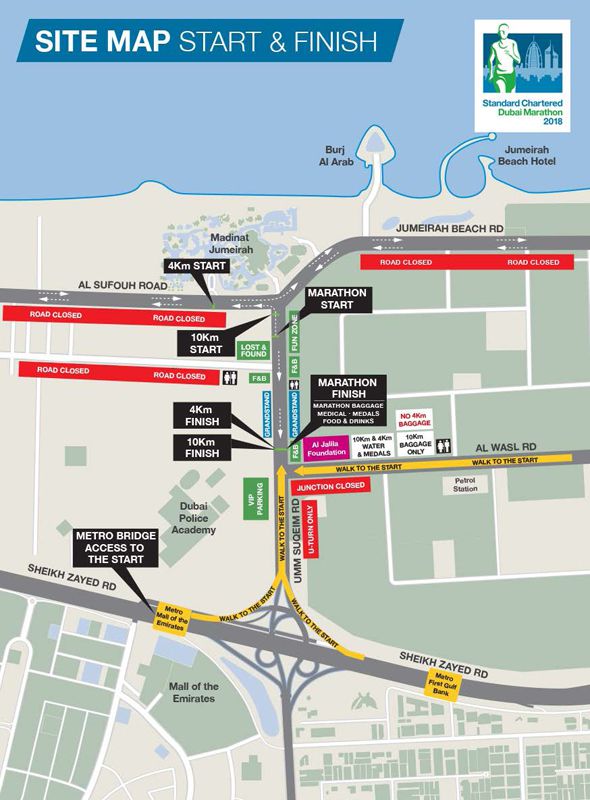 WHICH ROADS WILL BE CLOSED?

Basically, the routes you can see on the map above for all three races – these roads will all be closed. The roads will be closed from around midnight until 1pm on Friday afternoon. So that means all of Beach Road and a lot of Umm Suqeim Road will be closed for the whole of Friday morning.

WHERE SHOULD I WATCH FROM?

The elite athletes will flash by at 20km per hour, so as long as you’re there early enough, pretty much any location along the route will give you an idea of how fast they run.

For the best pictures, try opposite the Burj Al Arab. The best atmosphere is undoubtedly at the finishing line, which every year is packed with cheering Ethiopian fans – their enthusiasm, is in our opinion, the best thing about the whole day. There are grandstands at the finishing line so it’s an easy place to sit.

What time do you have to be there by? Well, the marathon world record time is 2 hours and 2 minutes, and the marathon starts at 6.00am, so you’ll want to get there for at least 8am (maybe we’ll see the Berlin record smashed this year?).

WHO SHOULD I WATCH OUT FOR? 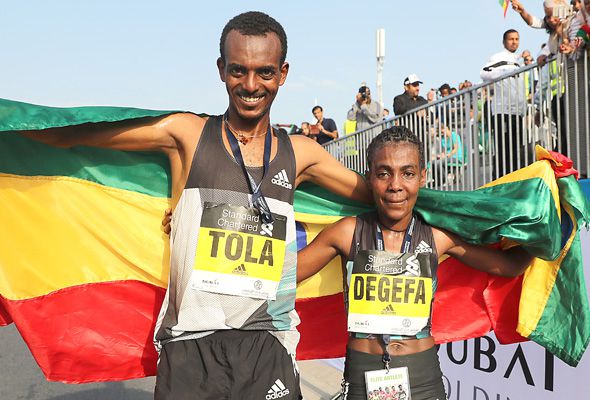 Two of the world’s leading marathon runners, Aselefech Mergia and Mare Dibaba – again, both of Ethiopia – will go head-to-head in the women’s event. Mergia is the greatest female runner in the history of the Dubai Marathon, having won three times. This will be her first appearance since her last victory in 2015. Meanwhile, Dibaba took the women’s marathon bronze at the Rio Olympics in 2016.

In the wheelchair race, defending champion Rafa Botello of Spain will take on nine-time world champion and double Paralympic gold medalist Marcel Hug of Switzerland. Known as the “Silver Bullet”, the Swissman often trains in the UAE, but this will be his first race here.

WHERE DO I PARK?

Basically, don’t even try to park on Jumeirah Beach Road, Al Sufouh Road, or in the Madinat Jumeirah and Police Academy area.

Plan to arrive at least 90 minutes before the start of your race if you’re running, so you can drop off your bag, and have time to figure out where your start point is.

Of course, you should already have your run numbers when you arrive. These need to be picked up at the Jumeirah Beach Hotel conference centre – you can do this between 2pm and 8pm on Tuesday, 9am and 8pm on Wednesday, and 9am and 5pm on Thursday.

If you’re running, good luck (and good on you!) and if you’re cheering, shout loud, as your encouragement will be of great help…

Sport & Fitness
EDITOR’S PICKS
So, when is the next UAE public holiday in 2021?
READ MORE
All of the lavish new hotels set to open in Dubai in 2021
READ MORE
16 of the best pool passes in Dubai that are fully redeemable
READ MORE
All of the restaurants at West Beach, Palm Jumeirah
READ MORE
MOST POPULAR
7 beautiful things to do in Abu Dhabi this weekend: June 24 to 26
10 amazing things to do in Dubai this weekend: June 24 to 26
Celebrate 40 years of JA with 40 per cent off these top resorts
This new breakfast deal includes pool access and Dubai fountain views
Immersive digital art gallery, Infinity des Lumières opens on July 1
YOU SHOULD CHECK OUT
Our website uses cookies and other similar technologies to improve our site and your online experience. By continuing to use our website you consent to cookies being used. Read our privacy policy here.