Here's what happened when K-Pop supergroup EXO came to Dubai

The band was in town to celebrate their song being added to the Dubai Fountain.

If you hadn’t heard of EXO before, we’re pretty sure you’ll know their name now.

The Korean supergroup – considered one of the hottest boybands in the world right now – landed in Dubai early on Tuesday morning.

Why were they here? Because one of their smash hits, Power, has been chosen as the first ever K-Pop song to be used for a Dubai Fountain performance.

Dozens of fans gathered at Dubai International Airport to greet the stars, and it wasn’t long before the hashtag #WelcomeToDubaiEXO was trending on social media.

The band, all dressed in snappy suits, then headed to the Burj Khalifa, where they held a press conference in front of media, officials, and a few lucky fans who started chanting: “E.X.O”.

At one point during the press conference, the band – who were visiting Dubai for the first time – suggested they might be returning to the UAE sometime in the near future.

“We want to come back again here to perform our next concert,” one band member said.

We are happy to have you again! @weareone.exo @visit.dubai #BurjKhalifa #EXO

The group then stepped outside to get the best view of the show, which started at 5.30pm…

Waiting for the launch of @weareone.exo’s new song to be played on The #DubaiFountain. #BurjKhalifa

Meanwhile, huge crowds of fans had gathered around the Dubai Fountain throughout the day:

I’ve been living here for eight years and I’ve never seen this many people crowd the fountain #EXOinDubai #welcometodubaiEXO pic.twitter.com/BsacbApszq

Hundreds of people sang along as Power made its watery debut:

Amazing fans and an amazing show with the debut of @weareone.exo’s latest song on The #DubaiFountain.

EXO band members could be seen filming the performance on their phones: 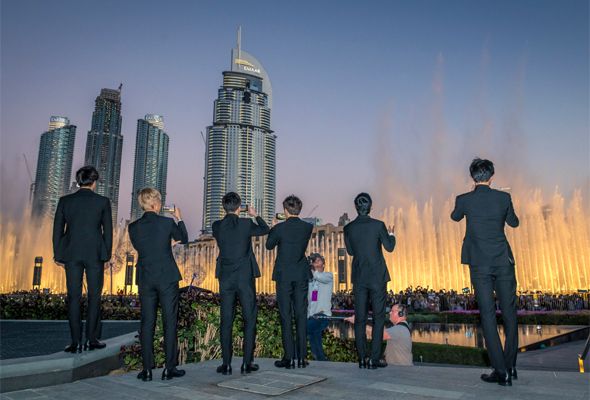 This is what the band had to say about the experience: “We are delighted to introduce global audiences to our song Power at this world-famous site.

“It is a true honour for our song to have been chosen as the first ever K-Pop to be played by the Dubai Fountain; not only is Power a dynamic song, but the lyrics describe how music can make people stronger by uniting us all.

“This ties in with the very essence of the Dubai Fountain itself, a place where visitors from all around the world gather together in one spot to enjoy the truly spectacular fountain show.

“Watching the Dubai Fountain dance to Power was a truly magnificent experience for us. We would advise everyone to visit this amazing attraction when they are in Dubai.”

How cool! We hope the boys are enjoying their time in Dubai – and we think Power might have just become our favourite Dubai Fountain track. Sing it with us, we got that power, power!