This will be a transport game-changer…

The pods – which are basically self-driving taxis – are being developed by the Dubai Roads and Transport Authority (RTA). They are designed to travel short to medium distances, carrying up to 10 passengers in each pod.

The clever system also allows the pods to be coupled together or detached, depending on the destinations of riders. So at times, rather than a taxi, the pods can join together to look more like a self-driving bus.

ALSO READ:
Here’s what Dubai’s driverless taxis are going to look like

This video shows how it’s supposed to work:

The initial tests of these futuristic vehicles took place on the sidelines of the World Government Summit at the Madinat Jumeirah. As well as Sheikh Mohammed, Crown Prince Sheikh Hamdan was there, as was Sheikh Mansoor. It was a pretty big deal. 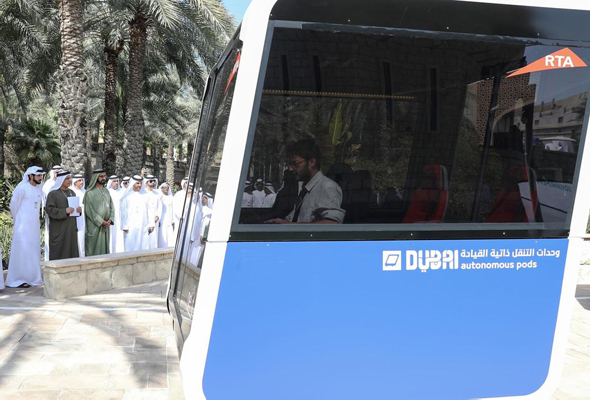 Mattar Al Tayer of the RTA said the success of the initial tests would bring about a breakthrough in transport systems that offer innovative mobility solutions and ease snarls in the city.

News
Transport
EDITOR’S PICKS
9 royal-approved Dubai restaurants
READ MORE
12 incredible rooftop pools in Dubai to check out
READ MORE
16 of the best beach bars in Dubai for sundowners
READ MORE
Covid-19 rules in Dubai: all the updates you need to be aware of
READ MORE
MOST POPULAR
Join us for a preview of Fairmont Bab Al Bahr's Valentine's dine around
A new Amapiano brunch is coming to Annex at The Abu Dhabi Edition
Pay off your traffic fines in installments without interest
This stunning new gastropub is officially open at Soho Garden
Review: DIFC's new rooftop Japanese restaurant, Clap
40 places to celebrate Valentine's Day in Dubai
YOU SHOULD CHECK OUT
Our website uses cookies and other similar technologies to improve our site and your online experience. By continuing to use our website you consent to cookies being used. Read our privacy policy here.