Bluewaters Island – the development opposite The Beach at JBR – received a VIP visitor this week; the one and only HH Sheikh Mohammed bin Rashid Al Maktoum.

The vice president of the UAE and ruler of Dubai reviewed the progress of the Dhs8 billion development, which is home to the world’s largest and tallest ferris wheel. 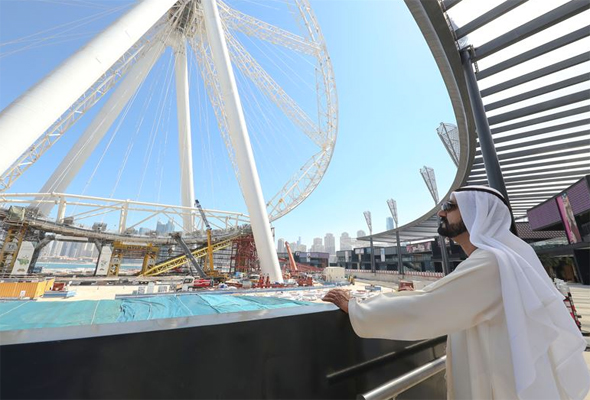 When complete, Bluewaters Island is expected to become a major tourist destination, with shops, restaurants and other attractions (including a Madame Tussauds wax museum).

“We want our country to be known as a land of happiness and hope for both people and visitors, and for all those who have ambitions and dreams,” Sheikh Mohammed said. 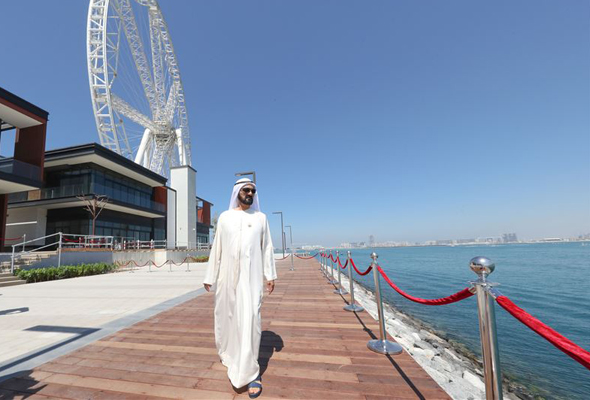 “The projects we see around us today reflect this vision as well as our determination to achieve the highest levels of excellence.”

Here are some more pics of the Dubai ruler exploring Bluewaters Island:

The centrepiece of Bluewaters Island is Ain Dubai, a 210-metre high observation wheel. The wheel rim was completed earlier this year, and has already become a prominent feature of the Dubai skyline.

The attraction will offer 360-degree views of the city and its coastline, with passenger pods so spacious that visitors will be able to walk around in them.

One of the legs of Ain Dubai will also feature the world’s highest rope climbing platform, with a height of over 150 metres.

News
EDITOR’S PICKS
So, when is the next UAE public holiday in 2021?
READ MORE
All of the lavish new hotels set to open in Dubai in 2021
READ MORE
16 of the best pool passes in Dubai that are fully redeemable
READ MORE
All of the restaurants at West Beach, Palm Jumeirah
READ MORE
MOST POPULAR
Watch: 100 days to go for Expo 2020 Dubai
Burj Khalifa tops list of most searched-for bucket list experiences
There's massages and panoramic views at the highest spa in Dubai
7 beautiful things to do in Abu Dhabi this weekend: June 24 to 26
10 amazing things to do in Dubai this weekend: June 24 to 26
YOU SHOULD CHECK OUT
Our website uses cookies and other similar technologies to improve our site and your online experience. By continuing to use our website you consent to cookies being used. Read our privacy policy here.