People often say that the cost of rent in Dubai is comparable to cities like London and New York. In fact, many residents in the UAE opt to commute from neighbouring emirates just to save a bit on the cost of living.

A new report from property developer Asteco looking at Q1 of 2018 gives us some concrete numbers on just what the price differences are for renting an apartment between each of the seven emirates.

The report breaks down the cost of rent by neighbourhood (spilt into low, medium and high) with particular focus on Dubai and Abu Dhabi, but also across the remaining northern emirates.

And we’re not going to lie, the differences are pretty shocking. Let’s take a look…

Here you can see that the typical cost of a one-bedroom apartment in Downtown Dubai averages between Dhs65,000 to Dhs120,000 per year, while a similarly-sized apartment in Dubai Marina tops out at around Dhs115,000. 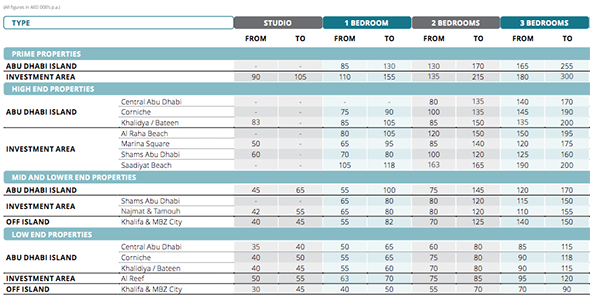 The UAE capital, which is traditionally thought to be more expensive than Dubai, actually has a wider range of rental options.

A ‘Prime’ located one-bedroom on Abu Dhabi Island ranges between Dhs85,000 and Dhs130,000. While if you want to live along the Abu Dhabi Corniche, you can find an apartment for around Dhs70,000 per year.

Now this is where things get really interesting (and affordable). As you can see, the rest of the northern emirates offer far better value for money when it comes to renting, with a high-end one-bedroom apartment in Sharjah maxing out at around Dhs38,000 per year.

Ras Al Khaimah and Fujairah tend to skew a little higher in the mid-to-late Dhs40k for the same sized property, but that’s still significantly cheaper than what you’d be paying for an equivalent flat in Dubai or Abu Dhabi.

If you’re really looking to make a saving you can apparently rent a studio apartment in Sharjah for as low as Dhs14,000 per year. Whether it’s worth the commute, however? That’s entirely up to you.

You can check out the full report (which includes villa and office rental prices) on the Asteco website.