As we say goodbye to another year, we look back at the best bits…

As 2018 draws to a close, here at What’s On we’re reflecting on the last 12 months in Dubai. From the stunning launch of the New Year’s Eve laser show, new feats and the opening of some pretty amazing projects, Dubai has had a pretty impressive year.

January: Burj Khalifa lights up for 2018 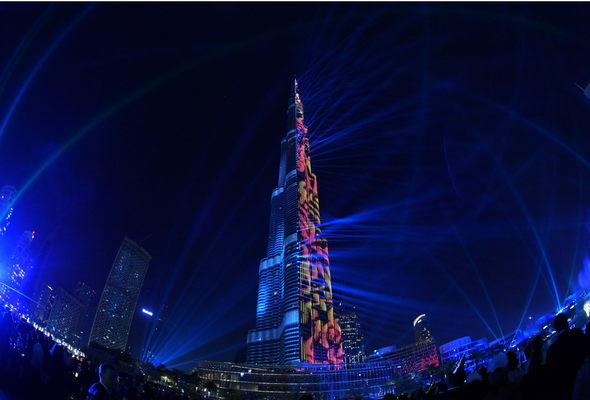 Lighting up the sky in celebration of the start of the year, the Burj Khalifa is one of the most watched spectacles on the planet, but ringing in 2018 was a little different, as a laser show replaced the usual fireworks display. The show, which lasted around seven minutes, also highlighted the Year of Zayed, featuring a portrait of the UAE’s founding father, Sheikh Zayed bin Sultan Al Nayhan. It established a new Guinness World Record for the largest laser, light and sound show on a single structure.

March: The QE2 opens as a floating hotel 10 years after arriving in Dubai

Bringing a slice of international history to Dubai, the QE2 finally opened as a floating hotel this year after almost a decade in Dubai. Located in Port Rashid, it’s been restored to look like it did when it was sailing the world in the 1970s. There are 224 guest rooms, an interactive museum, and there’s even been a restoration of the casino (with its original slot machines now decommissioned). You’ll also find a theatre, cinema and 13 dining and nightlife options – including some of the ship’s original restaurants.

The Backstreet Boys gig was arguably the biggest gig of the year, with the five-piece boyband putting on a stellar show at Media City Amphitheatre back in April to legions of UAE fans.

It was a big year of racing for Godolphin stables, owned by Sheikh Mohammed, winning both the Epsom Derby and Royal Ascot in 2018. When his horse Masar, ridden by jockey William Buck, came through and won the Epsom Derby, the Dubai ruler couldn’t hide his delight and Dubai’s Crown Prince Sheikh Hamdan posted this brilliant video of Sheikh Mohammed dancing just after his horse won the race.

ALSO READ: A year in review: The cultural highs and lows of 2018

The Burj Khalifa has been used as a canvas for a lot of special events in its time – featuring national flags, dazzling light shows, and even movie release countdowns. And this year it added scorekeeper to its CV. The world’s tallest building became a live LED scoreboard for the duration of the 2018 FIFA World Cup, which took place in Russia over the summer.

After going viral with that salt-sprinkling meme, Salt Bae became one of the most famous internet sensations out there. And when the Turkish chef returned to check on his UAE restaurants (he has outposts in both Abu Dhabi and Dubai) in August, he also made time to see the sights – as well as attending to his ‘gram game. Teaming up with another Dubai icon, the Burj Khalifa, he shared this iconic salt-sprinkling snap to his Instagram, that amassed almost 1.5 million likes.

Al Qudra became our must-visit-immediately spot in November, when Dubai’s Crown Prince took to social media to unveil two man-made lakes shaped into two interlocking hearts. Dubbed ‘Love Lake’, if you fancy checking it out for yourself, you can find it on Google Maps here.

Emirates released this image of a diamond encrusted Boeing 777 called the ‘Bling 777’ back in December, and it got the whole city wanting to book a ticket immediately. The plane is sadly not real, and was in fact created by crystal artist Sara Shakeel.

News
EDITOR’S PICKS
13 Sheikh Hamdan-approved restaurants in Dubai
READ MORE
Dubai brunches temporarily banned in new preventative measures
READ MORE
12 upcoming Dubai mega-projects we can't wait for
READ MORE
16 of the best beach bars in Dubai for sundowners
READ MORE
MOST POPULAR
Covid-19: Dubai cancels Ramadan tent permits for 2021
Laugh out loud with Laughter Factory in your own home this March
8 things to look forward to in Dubai this March
This popular Aussie cafe has opened in a new location in Dubai
Wawa: The unassuming new eatery serving authentic Japanese food in Dubai
YOU SHOULD CHECK OUT
Our website uses cookies and other similar technologies to improve our site and your online experience. By continuing to use our website you consent to cookies being used. Read our privacy policy here.