It’s been another star-studded week in the city…

Both in town to perform, T.I at Drai’s and White Dubai, and Nas at Sole DXB, the two American rappers made time to catch up over some top Jamaican cuisine at Miss Lily’s.

In town to perform at a private event, American singer Ciara chose to fuel up at the What’s On Award-winning Ramusake before her performance.

ASAP Rocky made his return to Dubai this weekend, performing at super club Base as well as a private Sole DXB event. He also made time to dine at one of the city’s newest hotspots, Gaia, enjoying a chef’s table experience. 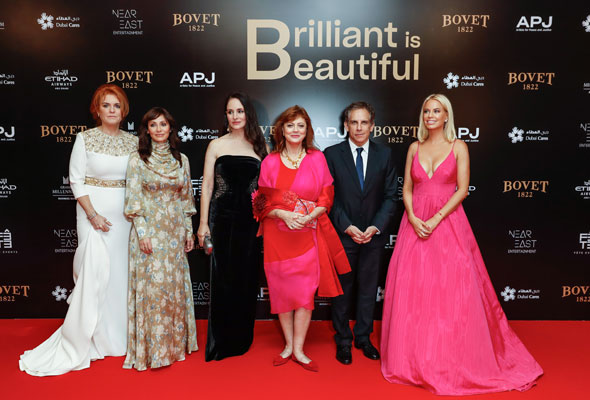 A host of stars gathered in the city as the ‘Brilliant is Beautiful’ gala took place in Dubai for the first time over the weekend. A-listers including Susan Sarandon and Ben Stiller walked the red carpet ahead of the charity event to support ‘Artists for Peace and Justice’, in collaboration with Dubai Cares, at the Grand Millennium Business Bay.

Reality TV star turned fitness guru Lucy Mecklenburgh has been holidaying with friends in Dubai this week, and she’s sure made the most of it. As well as heading to ladies’ nights at Soho Garden and Asia Asia, she’s been spotted topping up her tan at FIVE Palm Jumeirah and partying at Blue Marlin Ibiza UAE.

Dubai I love you ? back in the sun staying at the amazing @fivepalmjumeirah thanks to @inside.lifestyle for sorting it all ??

Love Island alum and newlyweds Jessica Rose and Dom Lever have returned to Dubai with lifestyle concierge company Inside Lifestyle. The duo have been enjoying their break at spots including Maiden Shanghai and Cove Beach, as well as taking a trip to the desert.

Another week, another DJ takes to the decks at Zero Gravity. This week, it was the turn of Are You With Me hitmaker, Lost Frequencies (real name Felix De Laet), who snapped this pic with the Dubai Marina skyline before his gig.