Get ready to step back in time, and into the shoes of some seriously VIP guests, on this legendary liner…

If you’re looking to book a Dubai staycation, you’re met with a host of options of modern, five-star resorts across the city. But if it’s a slice of history, side of culture or sprinkle of traditional charm you’re after with your weekend away, the QE2 Dubai is for you.

The legendary cruise liner sailed six million miles, carried 2.5 million passengers and even went to war during its lifetime, before arriving in Dubai in 2008.

Almost a decade after its arrival, it opened to the public in April 2018 as the city’s first floating hotel. 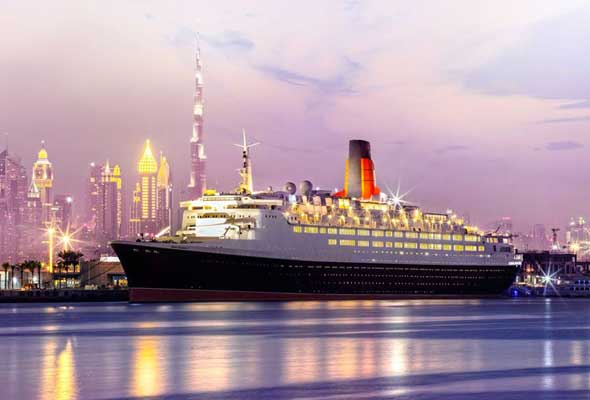 Well, although it soft opened to the public in April, it’s been slowly adding to its food and drink and leisure facilities, with almost all of the 13 decks now open (a couple are still closed). 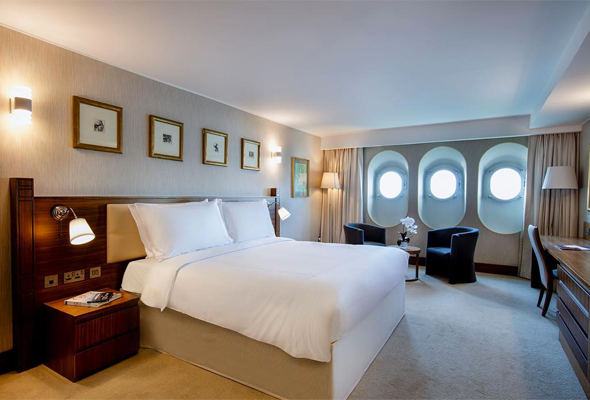 There are 224 rooms in total, and this is where the most modern refurbishments are noticeable. Although the traditional porthole windows still exist for guests to peer out onto the Arabian Gulf or Downtown skyline, the rooms have also had some serious upgrades, and now feature 49-inch flat screen TV’s, plush, comfy linen, complimentary Wifi, and phone charging usb sockets in the higher tier rooms.

The top tier suites are still not yet open, so the highest room category you can currently book are the Captain’s Club Rooms, which you’ll access via a lift and then two flights of stairs. Some also come with balcony’s, so you can sun yourself with a sea view.

Want to be treated like a queen? Two Royal Suites will be reserved for the creme de la creme of the QE2’s VIP guests, and were previously reserved solely for royalty. They come complete with expansive living quarters, a large veranda and bespoke in-suite amenities. 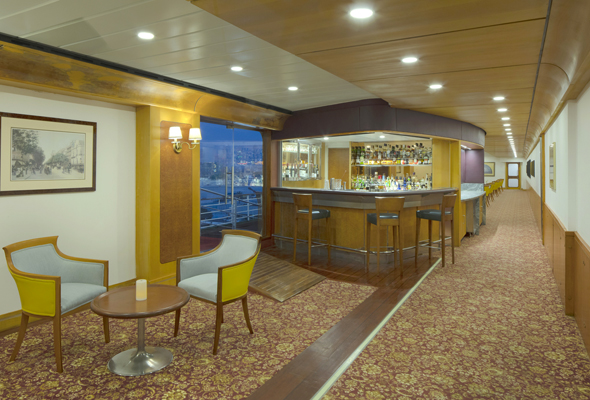 Guests can choose from nine dining options for breakfast, lunch, high tea, dinner and late-night across the QE2 ship.

For a more casual offering through the day, head to Q Cafe, adjacent to the lobby not on board the ship, the Casino Coffee lounge, found next to the now decommissioned casino on board.

In an evening, we’d head to The Golden Lion or The Yacht club for an aperetivo. At The Golden Lion, expect an authentic British pub (complete with smoky air) of dark woods, draught beers and darts boards. It’s decorated with all the commemorative shields from the QE2’s former ports of call, so you can take a trip down memory lane while you’re there. 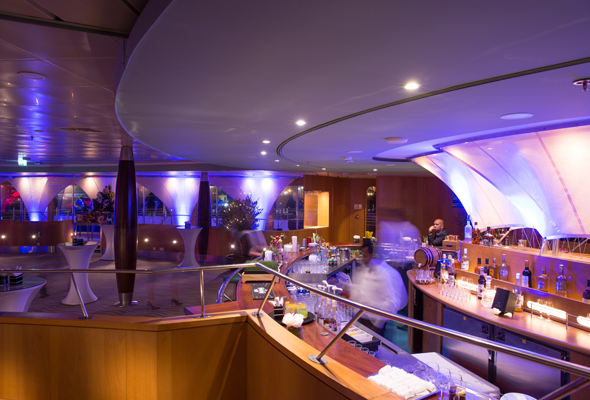 Over at The Yacht Club, it’s a slightly more upscale offering, with soft jazz and acoustic music playing, and guests can enjoy a comfy sofa seat out on the al fresco deck. 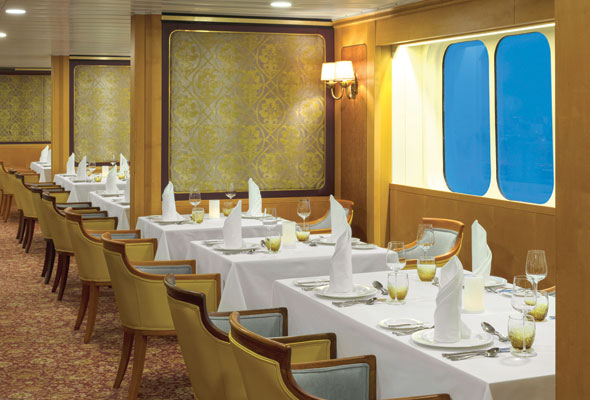 The unquestionable highlight is the Queen’s Grill restaurant. Known as one of the world’s most popular fine-dining restaurants back in its heyday, it’s been restored to look just like it did in the seventies, from the furniture to the fit-out. It serves up traditional six-course tasting menus each evening of traditional British fare to exceptionally high standards. It’s well priced too, at Dhs375 for the regular menu or Dhs275 for vegetarian.

Breakfast is served every day at Lido, the all-day dining restaurant which has been adapted to suit the lavish buffet spreads that you’ll find at most five-star Dubai hotels.

Lido has also become the venue of choice for another Dubai tradition – Friday brunch. The space is nothing special, but the chefs really put on a show when it comes to dishes. You’ll find everything from a seafood and salad bar, to live cooking stations of traditional roasts, Mexican food, pasta and Asian dishes such as sushi and peking duck with pancakes. Save room for desserts though, it’s an excellent array of traditional choices; think build your own eton mess, warm apple crumble and delicate lemon tarts.

Bit of a culture vulture or history geek? Then you need to book yourself onto one of the QE2 heritage tours. You’ll pass through the ship lead by an expert, starting from the museum, right through the decks to the ships restaurants and rooms. It’s priced at Dhs170 and takes around an hour – plus you’ll get Dhs100 back to spend on food and drink.

For a little extra, book a private heritage tour with Peter, who sailed on the ship as both a passenger and crew when the ship was operational, and you’ll get some brilliant insider knowledge on what life on the ship was like, as well as where VIP guests such as Nelson Mandela, David Bowie and The Beatles’ liked to spend their days. 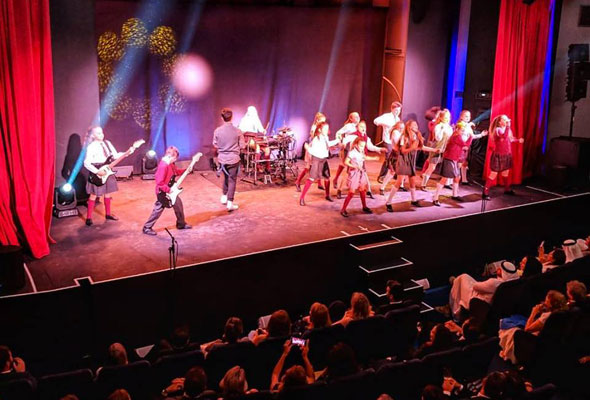 The 515-seater QE2 theatre is now open for business, and beginning to show regular programmes of regional and international variety shows. Although so far there have only been a couple of shows, guests and non-guests are promised there’s plenty to come this year.

The leisure facilities may be slightly lacking compared to neighbouring five-star resorts, (as of yet there’s no gym or indoor pool, but we’re advised they’re both opening soon), but it’s not the kind of hotel you’d come to for pampering.  You can however enjoy a treatment from a concise list at the QE2 Spa.

There’s a choice of two facials and six massages, and treatments are taken in the cosy spa treatment rooms which are small but perfectly adequate and relaxing. Prices for a 30 minute head and shoulder start from Dhs200, with 60-minute body massages from Dhs349.

Staycations
Travel
EDITOR’S PICKS
Ramadan in Dubai: 40 iftars to try
READ MORE
Where can Dubai residents travel? Check out these 14 destinations
READ MORE
Rumours, facts and reveals: New Abu Dhabi bars and restaurants
READ MORE
UAE announces reduced working hours for Ramadan 2021
READ MORE
MOST POPULAR
Sheraton Mall of the Emirates has a lot to offer this Ramadan
Looking for a cosy long stay residence in Dubai? Check this out...
Have you spotted the new Talabat Patrol team on Abu Dhabi roads?
Iftar home delivery for one? Here are some options...
Stunning Australian restaurant Hunter & Barrel is now open
YOU SHOULD CHECK OUT
Our website uses cookies and other similar technologies to improve our site and your online experience. By continuing to use our website you consent to cookies being used. Read our privacy policy here.