Reality stars, rappers, and so many footballers… 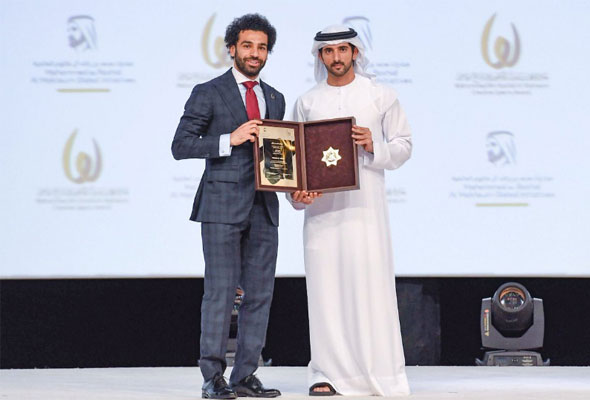 Egyptian footballer and Liverpool star Mo Salah was in Dubai to receive the ‘Outstanding Arab Athlete’ award at the 10th anniversary of the Mohammed bin Rashid Al Maktoum Creative Sports Award. He was presented the award by none other than Dubai’s Crown Prince, Sheikh Hamdan.

Most of the Manchester United football team

The Manchester United football team touched down in Dubai on Sunday January 6, for four days of warm weather training alongside their manager, Ole Gunnar Solskjær. The team have been training at the Nad Al Sheba Sports Complex in Dubai, but also made time to check out some of the city’s finest restaurants including Zuma and Salt Bae’s Nusr-et.

Anthony Joshua loves Dubai – just check his social media for proof. From partying at Soho Garden and STK JBR to visiting Saif Belhasa’s farm, it’s been an action-packed visit to Dubai for the boxing champion, who arrived just before New Year.

Former Emirates cabin crew hostess and Love Island star has been soaking up the sun, and catching up with friends, while on a visit to Dubai. She did all the usual Dubai things; beach, brunch and snapping selfies at rooftop bar, Penthouse.

Model and actress Helen Flanagan has been holidaying in Dubai with her footballer husband Scott Sinclair and young daughters. They rung in the new year at Le Royal Meridien in Dubai Marina, and were sure to share plenty of snaps by the beach.

Rapper Kid Ink has had a busy few days in Dubai, performing at Meydan party spots White, Drais and Toy Room. He made the most of some down time by heading to Soho Garden, sharing this snap with his 3.3 million Instagram followers.