Astronomer predicts when Ramadan 2019 will start in the UAE

The holy month of Ramadan is likely to begin on Monday May 6, 2019, according to an astronomer from the Sharjah Centre for Astronomy and Space Sciences.

According Gulf Business, astronomer Ibrahim Al Jarwan told local media that the crescent will be formed on Sunday, May 5, 2019 at 2:46am UAE time, but will not be able to be seen after sunset.

“The new moon of the Holy Month of Ramadan will then be possibly seen on Monday, May 6, 2019 as per the astronomical standards of moon sighting.”

Al Jarwan also predicted that the start of the month of Shawaal, which marks Eid Al Fitr, is expected on Monday, June 3, 2019.

ALSO READ: New to Dubai? Here’s everything you need to know about Ramadan

“The new moon of the month of Eid Al Fitr is to disappear three minutes after sunset, while the first day of Shawwal is to fall on Wednesday, June 5, 2019 as per the due standards of moon sighting,” he explained.

The official dates for the UAE are yet to be confirmed by the UAE’s moon-sighting committee.

It’s set to be the shortest fasting period in four years for UAE residents, with Al Jarwan saying that the fasting period will begin at around 13 hours and ten minutes at the start of Ramadan, extending to 13 hours and 40 minutes by the end of the holy month. 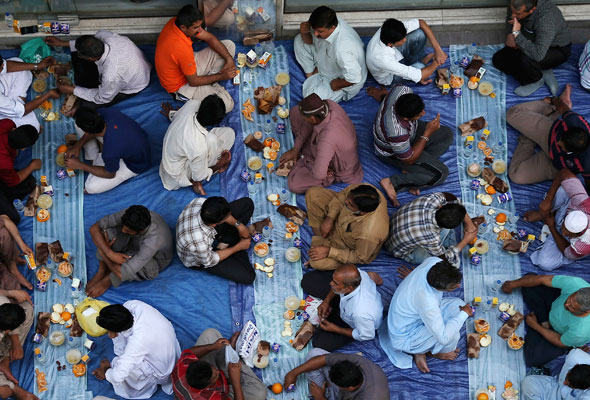 News
Ramadan
EDITOR’S PICKS
Here's the full list of UAE public holidays in 2023
READ MORE
23 incredible things to look forward to in the UAE in 2023
READ MORE
Hidden gems: 10 UAE desert pop-ups to discover this winter
READ MORE
Where to travel in 2023: 10 new flight routes from the UAE
READ MORE
MOST POPULAR
Cult Expo bakery, Bread Ahead to open in Mall of The Emirates
First look: Milos by Costas Spiliadis opens in Atlantis the Royal
Upcoming performances, international artists and more in Dubai
16 upcoming shows, sports events, concerts and festivals in Abu Dhabi
Win a holiday around the world with Dubai Creek Resort
YOU SHOULD CHECK OUT
Our website uses cookies and other similar technologies to improve our site and your online experience. By continuing to use our website you consent to cookies being used. Read our privacy policy here.