Hazza Al Mansouri and Sultan Al Neyadi have been partaking in an intense training program in Russia, but have returned to Dubai for a press conference on Monday February 25, at which one of them will be revealed as the first Emirati astronaut headed to space.

According to Russian media reports, a date for the mission to space has been set for September 25, and one of the two Emirati astronauts, will blast off for the International Space Station as part of a three-man mission.

The astronaut will spend eight days there before returning on October 3. It’s two days shorter than the original ten-day mission, which was previously announced.

This is set to be confirmed at the upcoming press conference. Also at the press conference, questions asked publicly on Twitter using the hashtag #UAEAstronauts will be put forward to the astronauts. 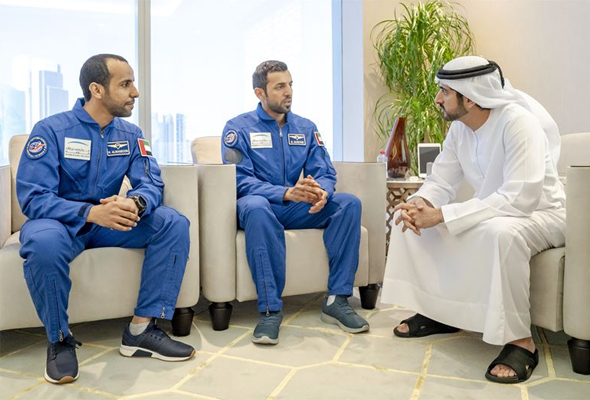 During their meeting, Dubai’s Crown Prince highlighted the importance of the mission that the first Emirati astronauts are tasked with. Sheikh Hamdan also reviewed the various steps of UAE Astronaut Programme, and the training they undergone at the Yuri Gagarin Cosmonaut Training Centre in Russia.

The two astronauts were selected from over 4000 applicants when the Mohammed bin Rashid Space Centre launched the UAE Astronaut Programme in 2017.

The programme has become one of the most important projects of the National Space Programme. It was launched in April 2017 with the aim of establishing an infrastructure for the UAE space industry.

News
Royals
EDITOR’S PICKS
Ain Dubai will open with fireworks, live music and a drone show
READ MORE
Incredible Aura SkyPool to open in Palm Tower this November
READ MORE
Brit Grand Slam hero Emma Raducanu confirmed for Mubadala Tennis
READ MORE
What’s On Nightlife Awards 2021: Here are the nominees...
READ MORE
MOST POPULAR
Free parking announced in Dubai on Thursday, October 21
Atlantis the Palm's Culinary Month is back with some amazing restaurants
7 fun spots to celebrate Halloween in Dubai with the family
The best places to watch the spectacular Ain Dubai fireworks show
This brunch serves up delicious Arabic dishes and non-stop captivating entertainment
YOU SHOULD CHECK OUT
Our website uses cookies and other similar technologies to improve our site and your online experience. By continuing to use our website you consent to cookies being used. Read our privacy policy here.