The Pope reflected on a historic visit to the UAE…

After a historic three-day visit to the UAE, Pope Francis reflected on his trip. On the flight back to Rome, Pope Francis said that he “saw a modern country,” while in the UAE. “It’s modern and welcoming of so many people,” he added.

The National further reports that he told journalists on board that the UAE is a nation that looks to the future. “They educate their children by looking forward,” he said. “They’re always looking for new things. I even heard someone say: ‘One day we’ll cease to have oil, we’re readying ourselves for that day.’”

During the visit, Pope Francis delivered a historic Papal Mass to 180,000 guests at the Zayed Sports Stadium in Abu Dhabi. After arriving on a G-Wagen Popemobile Pope Francis drove around the stadium waving to crowds, before conducting the 90-minute mass which featured readings and Homilies in an array of languages including English, Arabic, Italian, Tagalog, Latin, Korean, Konkani, Malayalam, Urdu and French. 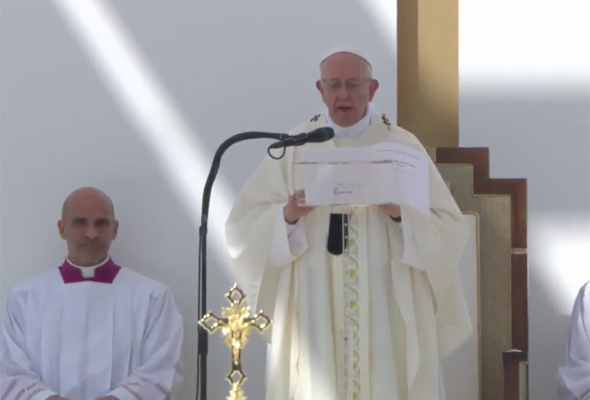 The main reason for his visit took place the day prior, when Pope Francis attended an interfaith meeting on Monday February 4.

The ‘Human Fraternity’ Declaration seeks to build bridges of love, amity and coexistence among peoples and to confront extremism and its negative impacts.The signing was attended by more than 400 religious leaders, as well as thinkers and intellectuals from around the world. 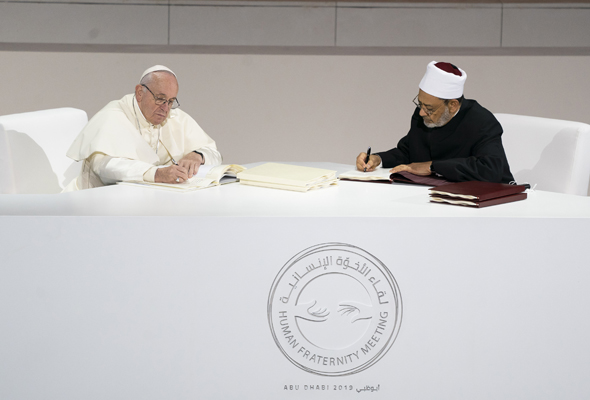 During the occasion, Sheikh Mohammed also announced the launching of a new award, ‘The Human Fraternity Award – Dar Zayed,’ which was jointly bestowed on Pope Francis and the Grand Imam.

UAE today was proud to host the historic meeting of His Holiness Pope Francis and His Eminence Dr. Ahmad Al Tayeb. We launched the ‘Human Fraternity Award’ to create a true interfaith dialogue. The two religious symbols were honoured during the award’s first edition. pic.twitter.com/69MBNiXV7z

At the International Interfaith meeting, Pope Francis was also presented with a copy of Celebrating Tolerance written by the Reverend Andy Thompson, MBE. The book is the first of its kind to be published to coincide with the Year of Tolerance, and features a foreword from HE Sheikh Nahayan Mabarak Al Nahayan, UAE Minister of Tolerance, who presented the book to The Pope. 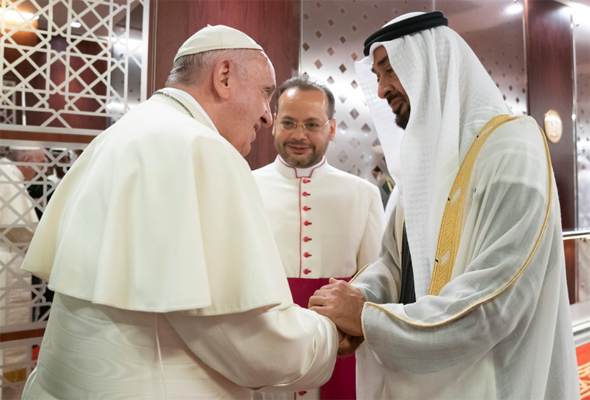 The Pontiff also visited the Presidential Palace as well as the Abu Dhabi Grand Mosque.