Arsenal football team see the sights of Dubai - on a hop on hop off bus!

They’re in the city for warm weather training and a mid-season friendly, but that didn’t stop some of Arsenal football teams brightest stars taking some time out to see the sights.

First team players Mesut Ozil, Bernd Leno, Ainsley Maitland-Niles and Shkodran Mustafi were treated to a tour of Dubai, which saw them visit some of the city’s top attractions to make sure they got their best tourist snaps. 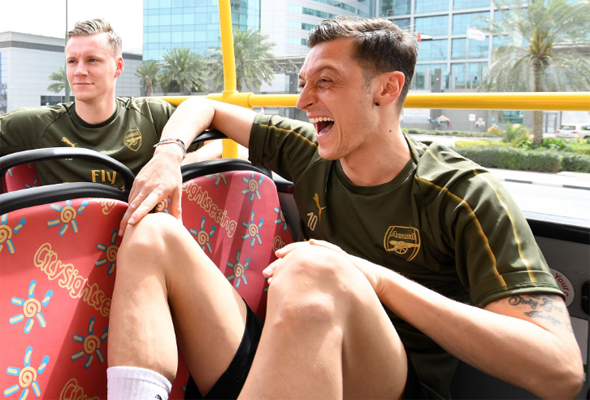 The four players were picked up on a hop on hop off City Sightseeing bus, making their first stop at the Dubai Frame. The players toured the spectacular structure, which opened in January 2018, where they stepped onto the glass bridge in the transparent viewing deck, and even showed off their fancy footwork to other visitors who were there. 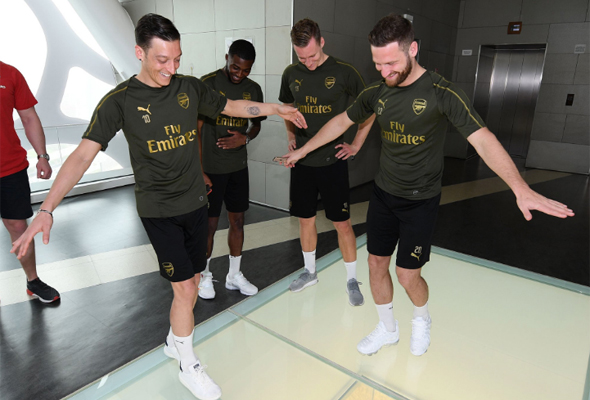 The players also made pit stops at Burj Khalifa and the Dubai Canal during their sightseeing tour.

It’s been a busy few days for the Arsenal team, who also paid a visit to Zabeel Palace, upon invitation from HH Sheikh Hamdan Bin Rashid Al Maktoum, deputy ruler of Dubai.

Arsenal FC will also be playing a mid-season friendly against Al-Nasr Dubai SC on Tuesday March 26. The match will kick off from 6pm, and will mark the formal opening of the newly built Al Maktoum Stadium.

Tickets for the match are on sale Platinumlist and onsite at Al Nasr’s Al Maktoum Stadium. Category three tickets are priced at Dhs100, while category two tickets cost Dhs150.

News
Sport & Fitness
EDITOR’S PICKS
Exclusive Reveal: Topgolf Dubai is here and ready for action
READ MORE
65 of the best outdoor bars and terraces in Dubai
READ MORE
7 brilliant dining deals in Dubai this month
READ MORE
18 of Dubai's most Instagrammable breakfast spots
READ MORE
MOST POPULAR
The stunning Hermès Carré Club is now open in Alserkal Avenue
Pics of the week: Your best photos of the UAE
Watch: A look inside Conor McGregor's Dhs20,000 per night Dubai villa
Discover the art of yoga at Louvre Abu Dhabi
Exclusive reveal: Off the Wall is an artsy, one-of-a-kind cocktail bar in Dubai
YOU SHOULD CHECK OUT
Our website uses cookies and other similar technologies to improve our site and your online experience. By continuing to use our website you consent to cookies being used. Read our privacy policy here.