Tennis legend Roger Federer celebrated his 100th ATP tour title win in Dubai over the weekend, as he won the Dubai Duty Free Tennis Championship for the 8th time in 69-minutes. In the process, he collected prize money of around Dhs1.92 million beating finalist Stefanos Tsitsipas 6-4, 6-4.

Former James Bond Pierce Brosnan has made no secret of the fact that he’s in the UAE. In fact, the actor has been sure to keep us updated every step of the way as filming for his new movie ‘The Misfits’ continues – and we’ve been loving it. From trips to the Louvre Abu Dhabi to camel trekking in the desert, swimming with rays at Atlantis The Palm and even drinking coffee with his own face on, we can’t wait to see these scenes play out when the film is released.

It was a short but sweet trip for Felix De Laet, aka Lost Frequencies. The Belgian DJ flew in to play a set at the colourful Thursday night party at FIVE Palm Jumeirah, before jetting out the very next day. He did make time to post this snap, simply captioned ‘Dubai rooftop parties’, before he left. 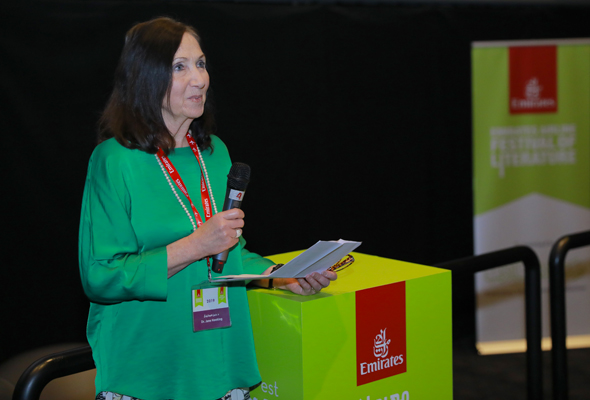 Author Jane Hawking is part of an impressive line-up of more than 140 authors in town for the Emirates Literature Festival taking place over the next few days. The second day of the festival concluded with a screening of the 2014 biographical romantic drama ‘The Theory of Everything’, accompanied by a Q&A from Dr. Jane Hawking, wife of the late Stephen Hawking, answering everyone’s burning questions.

When the lift tells you that you are passing the height of Big Ben… the Eiffel Tower… the Empire State Building.. and the Petronas towers in Malaysia you know you are high ??? @atthetopburjkhalifa @visitdubai pic.twitter.com/pFGtGLEzIm

Instagram star-turned-singer Tallia Storm was invited by Visit Dubai to see the best of the city’s offerings this week, as well as performing at Dubai Food Festival’s Beach Canteen. She shared snaps throughout her trip, from checking in at Palazzo Versace, to checking out La Perle Wavehouse at Atlantis The Palm, At The Top at Burj Khalifa and Nikki Beach.

Former TOWIE star Ricky Rayment checked in to Dubai Marina’s newest hotel, Stella Di Mare for a few days of tan-topping with friends this week. He shared pictures with his 327,000 Instagram followers at restaurants and bars inside the hotel including Leonardo and Skyland.