Cinema Akil is hosting iftar and movie screenings this Ramadan

Written by:
Lauren Fletcher
1st May 2019

Popular art picture house Cinema Akil has teamed up with Project Chaiwala to bring a dinner and movie concept to Dubai this Ramadan, named Cinemajlis.

The cinema will be transformed into a dining majlis, serving a family-style South Asian cuisine iftar every evening followed by a selection of award-winning Arabic films, with the first screening at 9pm and a second at 11pm.

The eclectic cinema, favoured for its casual set up and cosy sofas, has long had a reputation in Dubai for its cultural movies and cinematic arts, showcasing films and directors from across the decades. 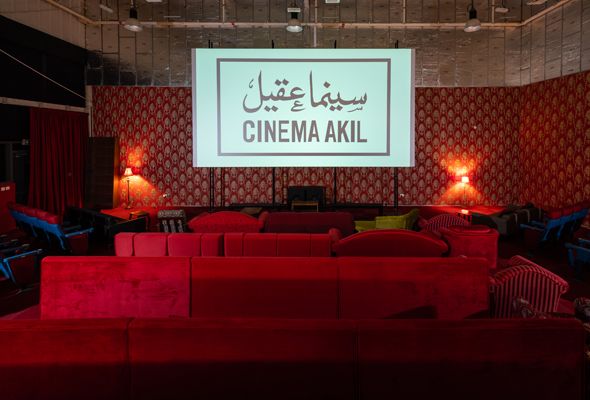 01. The Poetess directed by Stefanie Brockhaus

This documentary feature film is the story of Saudi poet Hissa Hilal, the first female to make it to the final of the male-dominated Million’s Poet TV poetry competition that attracts 70 million viewers per episode. She may wear a full face veil but Hissa’s personality shines through in this film.
May 4 to 11

02. Naila and the Uprising directed by Julia Bacha

Showing the vital role that women played during the first Palestinian intifada in the late 1980s, Julia Bacha’s militant documentary combines interviews and archive footage of the women who entered into the arena of political and social uprising after many men were arrested or captured.
May 11 to 17
*This screening is held in collaboration with Reel Palestine film festival and will commemorate Nakbah Day on May 15

03. The Journey directed by Mohamed Al-Daradji

This film is set during the Eid Al Adha celebrations in Baghdad and it follows the story of Sara, a young woman grappling with her decision to become a suicide bomber. When it was released in 2017 it was the first Iraqi film in 27 years to be shown in cinemas in Iraq and was selected as for the Best Foreign Language Film at the 91st Academy Awards.
May 17 to 24

There will also be games, talks and performances by open mic event Blank Space. To commemorate Nakbah Day on Saturday May 15th, there will be a series of short screenings, alongside the UAE release of Naila and the Uprising, a story about women’s vital role in the first Palestinian intifada in the late 1980’s, first screened during Reel Palestine in January.

Co-founder and managing director of Cinema Akil said, “With Cinemajlis, Cinema Akil is transforming its screening room to bring the spirit of Ramadan’s unique communal experience into the cinema environment throught the setting, the culinary offering and the film program specially curated for Ramadan.”

The project launches on Friday May 10th and will run throughout the month of Ramadan. The Iftar will include casual, family-style South Asian cuisine and will be served at 6.30pm each evening there’ll also be pre-iftar matinee screenings on weekdays.