This isn’t a pool day for the faint-hearted…

British pool architects, Compass Pools, have designed the world’s first 360-degree infinity pool intended to be built on the rooftop of a 55-storey building. The designers had hoped the pool would be approved for a new building in London, UK but it seems now that they also have their sights set on Dubai.

Technical director Alex Kemsley said in a video, “We’re in talks with a super-luxe hotel chain and developers in the UK and Dubai to actually make this happen, which is very exciting.” The acrylic edge gives 360-degree views of the city from 220 metres high, just imagine seeing Dubai from above – but also underwater.

The structure of the pool, named Infinity London, uses clever ‘James Bond-style’ design elements, including a hydraulic spiral staircase, which emerges from underwater so that people can get in and out. “Normally a simple ladder would suffice, but we didn’t want stairs on the outside of the building or in the pool as it would spoil the view,” Kemsley said on his website. 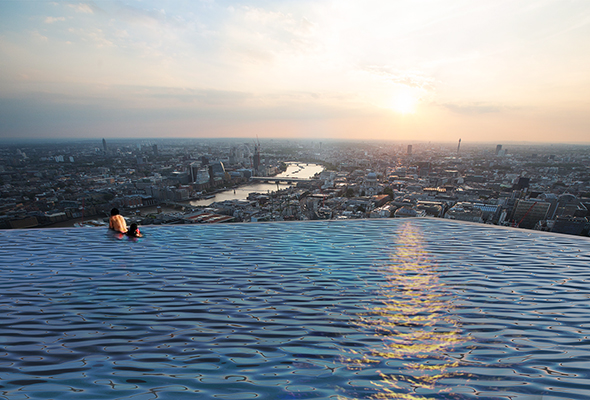 As the former president of the British Swimming Pool Federation, Kemsley took to his Youtube Channel to answer some questions the internet had about the project.

“We were asked about lifeguards, we obviously can’t put a chair on the side of the pool. However firstly you would have someone in the swimming pool with a waterproof radio, and underwater cameras that can detect if someone is underwater for any period of time or in danger and automatically trigger the staircase.”

Safety has played a huge part in the project. The 600,000 litre pool has a 1.4 metre water depth, so there’s no risk of anyone falling out. And there’s a big focus on sustainability as well, the pool will be heated using the waste energy of the building’s air conditioning system.

While Compass Pools have said that construction for Infinity London could begin in 2020, we’re hoping ‘Infinity Dubai’ will come to life even sooner.

But surely there’s space for a swim-up bar…?

News
EDITOR’S PICKS
Covid-19 rules in Dubai: all the updates you need to be aware of
READ MORE
9 royal-approved Dubai restaurants
READ MORE
16 of the best beach bars in Dubai for sundowners
READ MORE
Where to get the Covid-19 vaccine in Dubai, Abu Dhabi and across the UAE
READ MORE
MOST POPULAR
Emirates resumes flights to key Australian cities, starting today
Join us for a preview of Fairmont Bab Al Bahr's Valentine's dine around
Abu Dhabi named safest city in the world for fifth year running
Inside one of the coolest new hotels opening in Dubai
Department of Health approves three new rapid Covid-19 tests
YOU SHOULD CHECK OUT
Our website uses cookies and other similar technologies to improve our site and your online experience. By continuing to use our website you consent to cookies being used. Read our privacy policy here.