Dubai drivers: The speed limit on Tripoli Street is increasing

It will increase on certain sections from Friday October 25…

If you’re regular routes in Dubai include using Tripoli Street take note: the speed limit is increasing on certain sections of the Dubai road. 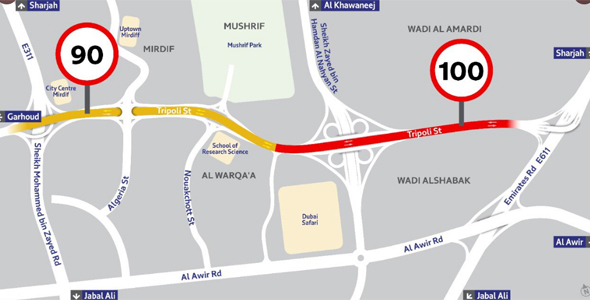 ALSO READ: Sharjah motorists can now get a 50 per cent discount on traffic fines

So, if you’re daily commute includes using the road near Mushrif Park and Dubai Safari, it’s likely to affect your route.

The RTA made the announcement on Wednesday, saying that the decision was reached alongside Dubai Police following “elaborate studies conducted by Traffic and Roads Agency”.

“Current speed limits are being revised as part of RTA’s traffic safety studies continuously commissioned on vital roads across Dubai Emirate,” explained Maitha bin Adai, CEO of the RTA’s Traffic and Roads Agency. “Lowering or increasing speed limits depends on the road condition and the surrounding environment, and is decided in coordination with the strategic partners.”

The existing speed limit signs will be changed to reflect the new speed limits on Friday October 25 and directional and cautionary signs will also be adjusted.

News
Transport
EDITOR’S PICKS
What’s On Nightlife Awards 2021: Here are the nominees...
READ MORE
It's back! What's On Lock In returns to Media One Hotel
READ MORE
Arts and culture: 5 spots we can't wait to visit at Expo 2020 Dubai
READ MORE
UAE petrol prices are set to decrease in September 2021
READ MORE
MOST POPULAR
Pics of the week: Your best photos of the UAE
A stylish new Southern-European Neo Bistro is opening in Dubai
Staycation at this stunning hotel which is now dog-friendly
Get an Expo 2020 Dubai monthly pass for Dhs95 valid for the whole of October
New films to watch in cinemas this week: September 23 to 29
YOU SHOULD CHECK OUT
Our website uses cookies and other similar technologies to improve our site and your online experience. By continuing to use our website you consent to cookies being used. Read our privacy policy here.