These stars just can’t get enough…

A strong contender for Dubai’s number one fan, Jason Derulo took time out of his busy performance schedule for a rooftop photoshoot. The Watcha Say hitmaker also had dinner at Atlantis The Palm hotspot, Nobu.

Former Westlife singer Brian McFadden was in Abu Dhabi this week to perform for Taste of Abu Dhabi. The Flying Without Wings singer played all of his biggest hits with former Boyzone member Keith Duffy.

Former member of Boyzone, Keith Duffy, took time out of his tour with Brian McFadden for a round of golf with professional player Nick Faldo.

Fashion influencer and daughter of Ibiza entrepreneur Wayne Lineker, Tia, is in Dubai on holiday at the moment. The model has enjoyed beach days and a trip to the desert, as well as watching the sunset from FIVE Palm Jumeirah’s Penthouse.

Not content with just one week in Dubai, British reality star Gemma Collins also visited Abu Dhabi this week. The TOWIE cast-member rode a dune buggy through the desert and attended the Boyzlife concert at Taste of Abu Dhabi.

Model and influencer Emily Shak has been staying in Dubai this week, enjoying all of the hotspots the city has to offer. The Scottish/Lebanese Instagammer checked out Opa, Cove Beach and The Penthouse.

The Only Way is Essex star Dan Edgar has been in Dubai for a while now with girlfriend Amber Turner, and has been spotted soaking up the sun at beach club, DRIFT, dining at Karma Kafe, and heading out for a trip to the desert.

For their final night in Dubai, Billie Faires and husband Greg Shepherd took to Gaia for dinner. The pair enjoyed a couple of weeks in the city, staying at Le Royal Meridien Beach Resort and Spa.

Love Island contestant Belle Hassan is also in Dubai at the moment, staying at FIVE Palm Jumeirah. The reality TV star has enjoyed a trip to the dessert, as well as a yoga session at Atlantis the Palm. 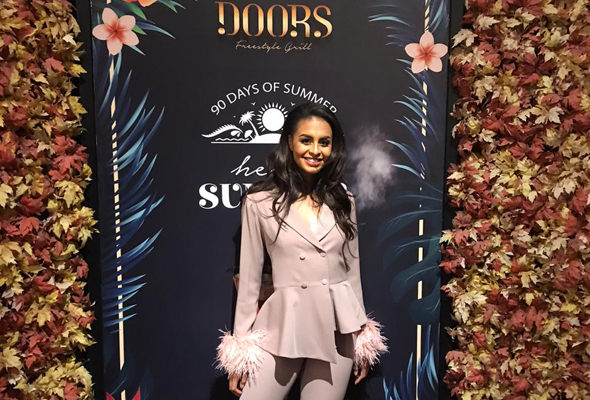 The newly crowned Miss Earth, Nellys Pimentel, was in Dubai last week following a trip to the Philippines. While she was here, the pageant queen visited Dubai restaurant Doors Freestyle Grill for dinner.

Celebrities
EDITOR’S PICKS
Ramadan in Dubai: 50 iftars to try
READ MORE
Where can Dubai residents travel? Check out these 14 destinations
READ MORE
Rumours, facts and reveals: New Abu Dhabi bars and restaurants
READ MORE
UAE announces reduced working hours for Ramadan 2021
READ MORE
MOST POPULAR
Looking for a long stay in a popular Dubai location? Check out Hilton Dubai The Walk...
Review: Is The Orangery your favourite new date night spot?
Deals and discounts: It's all about the ladies on Tuesdays at La Mer
Here's how you could win Dhs50 million this Eid weekend
What's On's epic Lock In staycation is returning to Dubai this month
YOU SHOULD CHECK OUT
Our website uses cookies and other similar technologies to improve our site and your online experience. By continuing to use our website you consent to cookies being used. Read our privacy policy here.