Could this be the best vegan burger in Dubai?

In the not-so-distant past, if you wanted to eat a vegan burger, you had to trawl through the frozen foods section at the supermarket and pick up a bland sweetcorn and chickpea frozen patty. Well, it was that, or you had to be satisfied with a dry hamburger bun, lettuce, tomato, and a huge sense of disappointment. My how things have changed…

Plant-based ‘meat’ patties have turned the burger game on its head with many restaurants around the world now offering veggie or completely vegan options.

Not to be outdone, a handful of new restaurants only serving vegan burgers have opened in Dubai. One such company hoping to convert the city’s meat-eaters is JOMO (AKA Joy Of Missing Out).

Get the #party started. Its never too early to celebrate the #weekend #vegandubai #selflove

The new vegan burger chain (available to order via ubereats and deliveroo) serves up a range of completely vegan options using Moving Mountains Burger patties, a plant-based meat alternative made with an all-natural blend of simple yet well thought out ingredients including mushrooms, wheat, soy and pea proteins.

Highlights on the menu include the No Fomo burger (Dhs49) served with a 4oz single vegan patty, vegan cheese, lettuce, tomato, and its secret ‘awesome’ sauce; and the Love You BBQ (Dhs54) single vegan patty, two crispy onion rings, vegan cheese, lettuce, tomato, and BBQ sauce. There’s also a selection of sides from V-cut skin-on fries, potato tots and onion rings, as well as a selection of plant-based shakes. 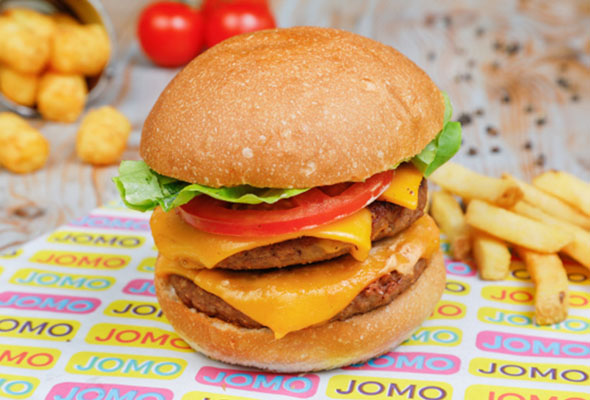 “The cool thing about the JOMO burger is that it’s a good fit for everybody,” says Robin Mehta, Co Founder of JOMO. “It’s not just to give vegans a great fast-food option, but to compete head on with the taste of a meat based product. A plant based burger has less calories, will leave you feeling lighter, and going by the number of non vegan repeat customers we have, it’s actually tastier too.“

JOMO Burgers are available on Uber Eats, Deliveroo and Talabat. Currently, they deliver to Downtown and the surrounding areas, but JLT location is set to open in the New Year.

Restaurants
EDITOR’S PICKS
What’s On Nightlife Awards 2021: Here are the nominees...
READ MORE
It's back! What's On Lock In returns to Media One Hotel
READ MORE
Arts and culture: 5 spots we can't wait to visit at Expo 2020 Dubai
READ MORE
UAE petrol prices are set to decrease in September 2021
READ MORE
MOST POPULAR
7 awesome things to do in Abu Dhabi this weekend: Sep 23 to 25
10 awesome things to do in Dubai this weekend: September 23 to 25
White Dubai to reopen as a dining and entertainment lounge
Review: The special 20 year anniversary menu at Hakkasan Abu Dhabi
See Andrea Bocelli perform live when he returns to Dubai in November
YOU SHOULD CHECK OUT
Our website uses cookies and other similar technologies to improve our site and your online experience. By continuing to use our website you consent to cookies being used. Read our privacy policy here.