If you ask us, there are few better ways to work out than in the dark. For starters, no one can see how sweaty and tired you are, or how hard you’re grimacing. But also there’s an added element of fun nightclub vibes that somehow makes you want to workout harder.

The huge warehouse space is pitch black, save for the glow-in-the-dark racquets, tennis balls and florescent orange, pink, green and red lines marking out the courts and walls of the three padel courts. The whole place looks like fresh out of a gnarly sci-fi movie. 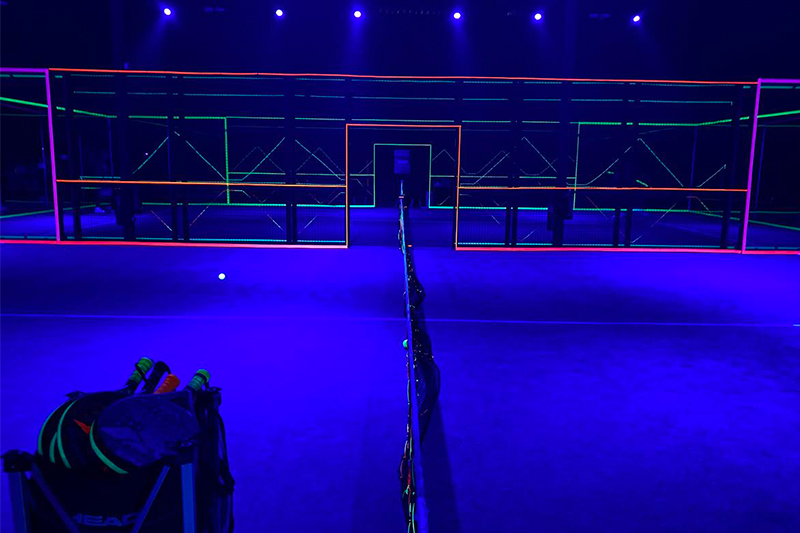 Founded by avid tennis enthusiast and entrepreneur Khalifa Bin Hendi, the opening marks the first of its kind in the region. “We are so excited to officially launch The Alley this month,” Khalifa explains to What’s On. “We know there are many padel centres here in the UAE, and we didn’t want to be copycats. That’s why we’ve launched something very unique that’s really fun. I want us to be the Barry’s Bootcamp or Crank of Padel!” he added.

“We believe The Alley makes padel more accessible and fun,” Khalifa explains. “We’ll be launching theme nights and padel-fit classes. We’ll also be hosting birthday parties, and maybe even have a live DJ spin some nights, too.”

Each padel court comes with its own speaker system, so you can link up your own music to the courts. If you’re new to the sport, you can sign up for lessons with the head coach.

Otherwise, simply grab four of your friends for a doubles game. Sessions cost Dhs440 for an hour, or Dhs660 for 90 minutes, with membership programmes also available.

Be sure to wear neon or white for maximum glow-in-the dark effect.

The Alley DXB officially opens mid-August, 2021. To book your spot, download the Playtomic app available on android and IOS.

The Alley DXB (beside Warehouse Gym), off Umm Sequim Road, Al Quoz, by invitation only until mid-August. @thealleydxb

Indoor
Sport & Fitness
EDITOR’S PICKS
What’s On Nightlife Awards 2021: Here are the nominees...
READ MORE
It's back! What's On Lock In returns to Media One Hotel
READ MORE
Arts and culture: 5 spots we can't wait to visit at Expo 2020 Dubai
READ MORE
UAE petrol prices are set to decrease in September 2021
READ MORE
MOST POPULAR
Movie review: How good is new sci-fi epic, Dune?
Pics of the week: Your best photos of the UAE
A stylish new Southern-European Neo Bistro is opening in Dubai
Staycation at this stunning hotel which is now dog-friendly
Get an Expo 2020 Dubai monthly pass for Dhs95 valid for the whole of October
YOU SHOULD CHECK OUT
Our website uses cookies and other similar technologies to improve our site and your online experience. By continuing to use our website you consent to cookies being used. Read our privacy policy here.