Meet Olympic hopeful 'Rasta the Ref', the quickest man at the Sevens

There aren’t many sports where the referee is faster than the players they’re officiating, but Rasta Rasivhenge is the exception. The trim South African, who can run 100m in a lightning 10.6 seconds, only became a rugby referee six years ago, but is already one of the world’s leading officials who took charge of the Sevens World Cup Final, when New Zealand beat England, earlier this year.

“I would like to believe that I am reasonably fit and fast, maybe quicker than a player,” smiles Rasta, 27. “I used to be an athlete in school, where I represented our province. I train with Morne Nagel, my trainer of those days and a former South African international sprinter who once won a World Championship relay gold medal. He still has the second fastest ever time for a South African over 60 metres, so I was quite pleased that I almost beat him at our last session together.” 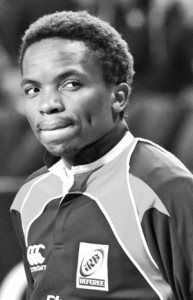 Being quick is a valuable asset for Sevens rugby, which is renowned for being fast and unpredictable. “Sure it helps,” agrees Rasta, seen in action above. “A good Sevens referee has to keep fit, train hard, and be strict with him or herself with regards to standards, performance and consistency.”

This is Rasta’s third outing at the Dubai rugby event but he explains he became the man in the middle by accident.

“I started refereeing because one of my mates had an altercation with a referee during a game and I didn’t like it. I went to console the referee after the game, and he suggested I take up the whistle.”

He now has a dream of officiating at the 2016 Olympics, where Sevens rugby makes its debut. “The Olympics for me is a great incentive, because it’s the pinnacle of this format of the game, and I want to be a part of the spectacle in Rio.”

Switching to the full 15-a-side form of rugby is also on Rasta’s wishlist.

“I have big ambitions in the Sevens sector, but I am setting my sights on post 2017/2018. I have a vision to move on to the next level which will be 15s. That is my ambition once I have fulfilled some goals in this wonderful Sevens game.”

Outdoor
Sport & Fitness
EDITOR’S PICKS
Here's the full list of UAE public holidays in 2023
READ MORE
23 incredible things to look forward to in the UAE in 2023
READ MORE
Hidden gems: 10 UAE desert pop-ups to discover this winter
READ MORE
Where to travel in 2023: 10 new flight routes from the UAE
READ MORE
MOST POPULAR
The Wizarding World officially comes to Dubai
11 homegrown UAE restaurants that have gone global
13 new brunches in Dubai that will spice up your February
You can now tour these 12 ladies' nights on Yas Island
Sweep your special someone off their feet at TH8 Palm Jumeirah
YOU SHOULD CHECK OUT
Our website uses cookies and other similar technologies to improve our site and your online experience. By continuing to use our website you consent to cookies being used. Read our privacy policy here.