Look out of your window on December 13 and you’ll see more luminous Lycra than a 1980s aerobics video. The time has come for the fourth annual Spinneys Dubai 92 Cycle Challenge, the biggest cycling event in the UAE, which this year sees Irish cycling star Sean Kelly take to the tarmac. 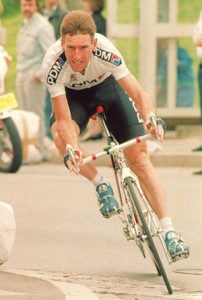 The 92km race is expected to attract over 2,000 participants from across the world, not to mention the baying crowds cheering them on. The race route will pass Dubai’s most iconic landmarks, including the Burj Khalifa, The Dubai Mall and Burj Al Arab.

Securing the services of Sean Kelly (right), who had three top ten finishes in the Tour de France, is a coup. Challenge director Stewart Howison said hosting Kelly would be good for the event and for cycling in Dubai.

The response from local riders, as well as cyclists from other countries, has also raised the profile of the event, he said. “We have seen riders of all abilities build up their fitness in our time-trial rides over the past four months and this has helped grow the event.”

Among the regulars returning to compete this year is Chilean pilot Humberto Boellert, who last year completed the course in just two hours and 15 minutes. “This is an extremely well organised event, with the four build-up rides and the event itself,” said Humberto, who is still a member of Chile’s national mountain bike
team at 50. “I love doing it, and this year I have set myself the challenge of posting the quickest time. I was 10th last year.”

First timers at the event include Dubai-based teacher Louisa Larsen, from the UK. “It’s fantastic to be a part of such a great event, and everyone is so supportive,” she says. “I only took up cycling this year and it’s a great way to keep fit – it’s fun too.”

The organisers’ long-term vision for the event is to rival other ‘cycle in the city’ races, such as Cape Argus in South Africa, which regularly attracts over 35,000 riders. If you want to help them do that, and you feel you’ve got the thighs for it, sign up now. Luminous Lycra optional.

News
Outdoor
Sport & Fitness
Things to do
EDITOR’S PICKS
Here's the full list of UAE public holidays in 2023
READ MORE
23 incredible things to look forward to in the UAE in 2023
READ MORE
Hidden gems: 10 UAE desert pop-ups to discover this winter
READ MORE
Where to travel in 2023: 10 new flight routes from the UAE
READ MORE
MOST POPULAR
MENA 50 Best 2023: The UAE restaurants that made the cut
Through my eyes: The UAE according to Natalia Shustova
Review: La Niña
1484 by Puro launches the UAE’s highest afternoon tea
Check out 10 of the most expensive homes for sale in Dubai right now
YOU SHOULD CHECK OUT
Our website uses cookies and other similar technologies to improve our site and your online experience. By continuing to use our website you consent to cookies being used. Read our privacy policy here.