What’s On previews Party In The Park, away from the main stage. Hear about the best brunch deal in Dubai, market stalls, acoustic sessions the best DJs

Party In The Park is plenty more than your run-of-the-mill music event in Dubai. Sure, there’s the main stage with its series of award-winning, world famous acts, from South African favourites Freshly Ground to the likes of Lily Allen, Richard Ashcroft and The Ting Tings, all of whom are responsible for some of most festival-friendly tracks around.

But beyond the main stage, you will find boutique shopping stalls, skate ramps, live performances from the region’s coolest graffiti artists, slack-lining, acoustic sets, fun festival makeovers… and probably the best brunch offer in Dubai this side of Christmas.

Let’s start with that. Fridays in Dubai wouldn’t be complete without brunch. For the very first time in the UAE, What’s On Party In The Park are offering you the chance to enjoy a famous Friday brunch, on November 14, bought to you by the institution that is McGettigans. Ticket holders can take their seat on the specially erected ‘brunch deck’ from 2pm to 5pm and enjoy an optimum view of the main stage for three hours of unlimited food and drink – think proper pub grub, sharing platters and beverages.

All that, as well as free reign to enjoy the rest of the festival once the indulgence is done, for just Dhs650. 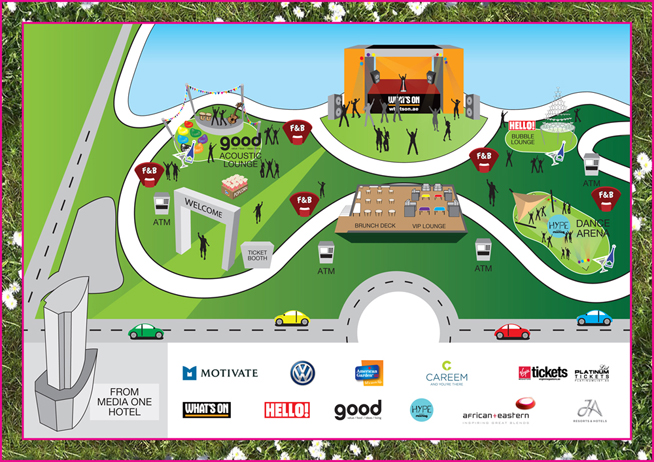 And if you haven’t eaten enough at brunch? Well, this is Taste Of Dubai meets music festival. Throughout the Media City Amphitheatre you’ll find some of the most popular eateries offering healthy – and not so healthy – sustenance. If pizza is your bag, we’ve got Burger Fuel, Oregano, Sushi Counter, Bystro Dubai, Moti Roti, Taqado and more.

Those who like the finer things in life can head over to the Bubble Lounge, sponsored by Hello! Middle East. Any ticket holder will be able to relax in style with a glass of something bubbly or pose for event photographers on the red carpet walk. If all that sipping and selfie-taking gets too much, then unwind at the hands of our professional pamperers.

If you need to kick-back, the Good area is for you. Now we know Dubai may have the weather but it has nothing on England for a good beer garden. Well, intorducing the The Good Garden, a little bit of rustic charm in an otherwise glittering cityscape of skyscrapers. Local artisans and food and drinks stalls line the area offering up unique arts, crafts and all manner of gems.  The acoustic stage provides a showcase of much-loved local acts featuring anything from soul to jazz.

**GET TICKETS FOR PARTY IN THE PARK**

Impressed? Well, don’t forget the music. Headlining the whole day is pop princess Lily Allen. When she first exploded onto the scene eight years ago with her single Smile – which held its spot at the top of the UK singles charts for two weeks – she brought a vibrant, witty-wordplay attitude to the music industry, not to mention a wacky wardrobe of prom dresses and trainers. With the encouragement from her showbiz parents (her father, Keith Allen, is an actor; her mother, Alison, is a film producer), Allen was a refreshing change in the world of manufactured pop, where every new artist seemed as if they arrived on a conveyor belt.

Also taking to the stage is former Verve frontman Richard Ashcroft, who rocketed to fame in the ‘90s with his band’s soaring violin-led track Bitter Sweet Symphony. Such is the power of Ashcroft’s songs that they are often chosen by fans to be played at their most personal moments. Ashcroft explains: “So much that fans have said to me is incredibly personal to them. If you’ve written any good tunes you will be involved in funerals and deaths, you will be involved in weddings and births.”

Having penned epic rock anthems such as Bitter Sweet Symphony, History, The Drugs Don’t Work, Lucky Man and A Song For The Lovers, Ashcroft’s songwriting credentials are bulletproof. As a frontman, he is renowned for deeply emotional performances. His talent has won him the respect of his peers as well as legions of devoted fans. Noel Gallagher famously wrote the track Cast No Shadow about the singer, and Coldplay frontman Chris Martin has described him as “the best singer in the world”.

As well as the two soloists, Brit indie favourites The Ting Tings are also on the bill. The duo – Katie White and Jules De Martino – are best loved for the monster hit ‘That’s Not My Name‘, while debut album ‘We Started Nothing‘ reached the top of the UK chart. Single ‘Shut Up and Let Me Go‘ bought the group further success. Second album ‘Sounds Of Nowhere’, which can claim assistance from Calvin Harris and Rihanna, among others, yielded further top 40 hits in the shape of ‘Hands’, ‘Hang It Up’ and ‘Silence’.

Having drawn inspiration from time in Ibiza and New York, White and De Martino released their third album ‘Super Critical’ in October 2014, and have embarked on a worldwide tour, including a leg in Dubai for Party In The Park, where they will join critically-acclaimed Freshlyground from South Africa.

Away from the main stage, our good pals at Hype are lending their expert hand to proceedings in the shape of the Hype Clubhouse. Dubai’s coolest clubs, DJs and urban culture junkies will come together for the first showcase of its kind.

If a little bit of what you fancy does you good, then you’re in for a mighty fine time, with house, tech-house, funk, soul, reggae, hip-hop, garage, UK bass, techno, drum ‘n’ bass and more all on the musical menu to get you movin’ and groovin’. Expect back-to-back sets, some old school turntablist skills (yay!); and a b-boy battle that’ll make your jaw drop.

News
Nightlife
Things to do
EDITOR’S PICKS
Here's the full list of UAE public holidays in 2023
READ MORE
23 incredible things to look forward to in the UAE in 2023
READ MORE
Hidden gems: 10 UAE desert pop-ups to discover this winter
READ MORE
Where to travel in 2023: 10 new flight routes from the UAE
READ MORE
MOST POPULAR
Pics of the week: Your best photos of the UAE
Dhow & Anchor has got you covered every day of the week
RTA: All the road closures you need to be aware about
Review: The Nice Guy Dubai
Masha and the Bear is coming to Abu Dhabi this April
YOU SHOULD CHECK OUT
Our website uses cookies and other similar technologies to improve our site and your online experience. By continuing to use our website you consent to cookies being used. Read our privacy policy here.