What’s On has one of the best viral videos of Dubai. Dubai Flow Motion shows the best things to do in Dubai, including inside Burj Khalifa.

A new video showcasing the very best of Dubai has gone viral thanks to its ingenious method of filming seamless connection the director has made between the different elements of the emirate.

Shot over three months by British-based urban filmmaker Rob Whitworth, the three-minute short takes the viewer on a fast-paced journey through the more showy parts of home as well as out into the charming Old Town and deep into the desert.

As Whitworth himself says: “My first impression of Dubai was that of super-tall buildings jutting out of the desert sand. However, after three months of exploration, research and filming, my lasting impression is of the eternal wonder of the desert and the importance it holds for the Emirati people.

“Dubai may be home to the world’s most outrageous skyline but Dubai’s desert dunes and historical creek are where you’ll find its soul.” 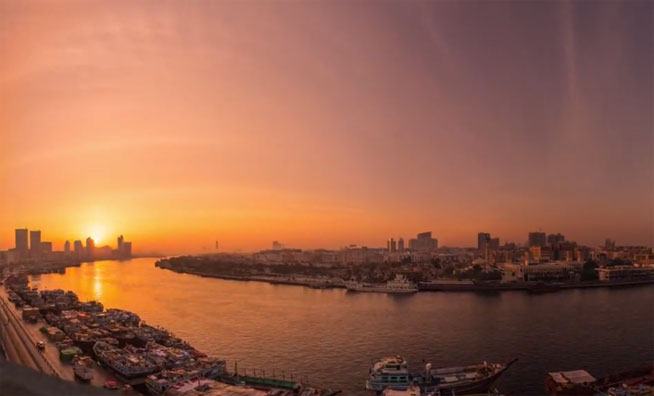 And he sure has no problem portraying it. The flow motion footage starts, like all great adventures in the region, on board an Emirates plane as it comes in to land at Dubai International Airport. Whitworth was granted access behind-the-scenes of the flight deck and cargo area, which allowed for footage from the runway to be coupled with shots inside the vast baggage carousels system.

From there, the journey continues along the Metro and out at Downtown to start where many eyes are drawn so early on; the Burj Khalifa. Using a filming technique that feels like the viewer is flying between locations in one continuous take, we are taken, quite literally, inside the Burj Khalifa, through its framework, floors and lift shafts, emerging occasionally in the residences and viewing decks, before finishing in the Dubai Mall. 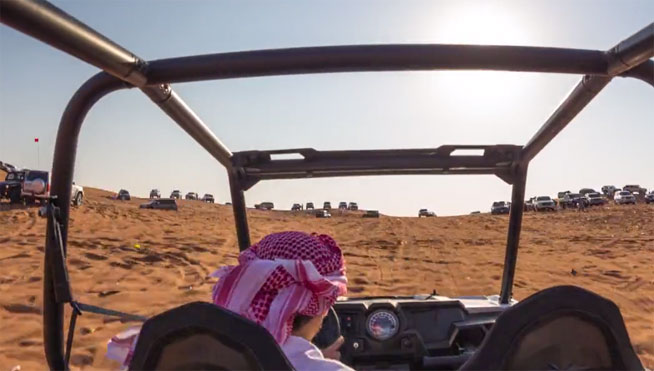 After a whizz through the world famous Aquarium as well as the Gold Souk and other shopping areas, the adventure continues on the ice rink before, Back To The Future-style, flying through a giant television screen and out in the desert. Surround by dune bashers, we hitch a ride on board a buggy and whiz up high-sided mountains of sand before, as the sun sets, a return to the comparative calm of The Creek for a more mellow abra ride.

The water segmant continues as the boat merges with a Skydive Dubai speedboat travelling through the Marina and onto the spit of land used as a runway and drop spot. The obligatory skydive shots – filmed through the fish-eye angle made popular by Dubai360.com – follow before a finale shot back in Downtown, complete with Burj Khalifa fireworks and the Dubai Fountains at night.

Phew, we’re tired just thinking about it. Now watch for yourself.

Meanwhile, you can see more the filmmaker’s amazing works by visiting his website: robwhitworth.co.uk

NOW WATCH MORE UNUSED FOOTAGE FROM THE AIRPORT AND THE CREEK

Art
Culture
Film
News
Salaam!
EDITOR’S PICKS
Ramadan in Dubai: 50 iftars to try
READ MORE
Where can Dubai residents travel? Check out these 14 destinations
READ MORE
Rumours, facts and reveals: New Abu Dhabi bars and restaurants
READ MORE
UAE announces reduced working hours for Ramadan 2021
READ MORE
MOST POPULAR
There's a 30 per cent sale taking place during the long weekend on LegalHomeDelivery.com
Pics of the week: Your best photos of the UAE
Here's why you need to visit Mimi Kakushi's new Friday lunch
New films to watch in cinemas this week: May 13 to 19
Torno Subito's new lunch menu offers a quick mid-week vacation
YOU SHOULD CHECK OUT
Our website uses cookies and other similar technologies to improve our site and your online experience. By continuing to use our website you consent to cookies being used. Read our privacy policy here.