VIDEO: Museum Of The Future project in Dubai unveiled

What’s On has Museum Of The Future video and pictures. The new building in Dubai by Emirates Towers was unveiled on Sheikh Mohammed Twitter.

Incredible plans have been unveiled for a ‘Museum Of The Future’ in Dubai that will set tongues wagging the world over.

The eye-catching structure was revealed by His Highness Sheikh Mohammed Bin Rashid Al Maktoum, Vice-President and Prime Minister of the UAE and Ruler of Dubai on Wednesday, and came with an accompanying video.

Set to open in 2017 in front of Emirates Towers, the circular structure is unlike any other building in the region, or indeed the world.

In a series of Tweets about the new project, His Highness wrote: “Today we have launched Museum of the Future, featuring innovation labs and a permanent exhibit for future inventions. Museum of the Future is integrated environment empowering creative minds to test, fund and market ideas for futuristic prototypes and services. It is a first step of many to come, marking the beginning of great achievements.” 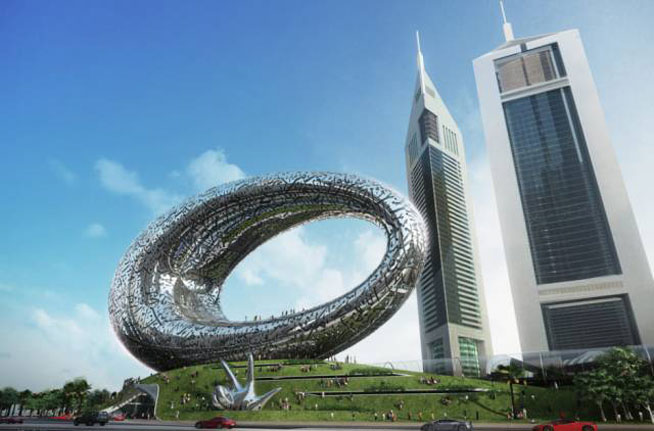 The museum’s motto, ‘See the future, create the future,’ is certainly evident in the design. The large silver structure is in the shape of an eye, hollowed out in the middle. The video shows a series of glass walkways, exposed elevators and balconies, and several stunning exhibits in communal areas. It will be a hub of innovation all working towards making Dubai a city of the future.

See the video for yourself below…

Art
Culture
News
EDITOR’S PICKS
Here's the full list of UAE public holidays in 2023
READ MORE
23 incredible things to look forward to in the UAE in 2023
READ MORE
Hidden gems: 10 UAE desert pop-ups to discover this winter
READ MORE
Where to travel in 2023: 10 new flight routes from the UAE
READ MORE
MOST POPULAR
26 of Dubai's best beachfront restaurants
8 wonderful things to do in Dubai this week: Feb 6 to 9
Where to go to get your Al Baik fix in the UAE
Reset and recharge with a relaxing staycation at this stunning Dubai hotel
The most expensive apartment in Dubai just sold for Dhs410 million
YOU SHOULD CHECK OUT
Our website uses cookies and other similar technologies to improve our site and your online experience. By continuing to use our website you consent to cookies being used. Read our privacy policy here.