Amir Khan: "I want to fight Manny Pacquiao in Dubai"

What’s On has news of potential world title boxing in Dubai or Abu Dhabi, after Amir Khan admitted he wants to fight Manny Pacquiao in UAE.

Champion boxer Amir Khan has admitted talks to realise his dream of a world title fight in the UAE have already taken place.

The British-born Muslim is watching with the intent – as the rest of world is – to see how the world title fight between Floyd Mayweather and Manny Pacquiao takes shape, eyeing as he does a showdown with the latter later this year.

Dubbed the ‘biggest fight in history’, the bout takes place in Las Vegas on May 2 after what seems like a lifetime of hype, speculation and false promises. 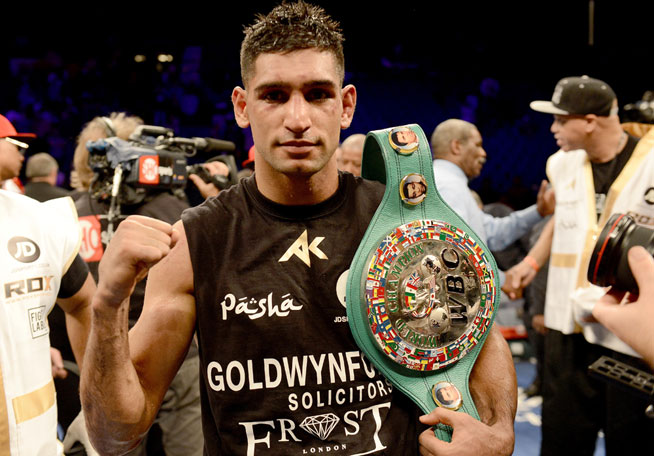 Between them, the American and the Filipino have earned more than $750million from boxing, with their showdown next month (profits of which are split 60/40 in favour of the unbeaten Mayweather) set to push that figure above the $1 billion mark.

And should Pacquiao, an old sparring partner of the Brit, wish to hop straight back in the ring, Khan will be waiting.
Speaking to British newspaper, The Daily Mail, the 28-year-old said: “I want this fight. I would love to box Manny. We’ve been looking at an event in Dubai and Abu Dhabi is only a short drive away. It’s a dream of mine to fight in that part of the world.”

He added: ‘Late November or December is perfect for me.’

He first discussed similar plans with What’s On in December 13 at the opening of EMD Fitness in Sunset Mall, state-of-the-art boxing and MMA centre created by the UAE’s leading professional, and good friend of Khan, Eisa Al Dah.

It’s another great piece of news for boxing fans after it was confirmed last week that Novo cinemas would screen the Mayweather v Pacquiao fight live at six giant screens across town.

Those keen to see the spectacle will be able to buy tickets online or from the relevant box offices – Dubai’s Cineplex (near Grand Hyatt), Ibn Battuta Mall, Al Ghurair Mall and Dubai Festival City; Abu Dhabi’s World Trade Centre Mall; and Sharjah’s Mega Mall – from Thursday April 16. They are priced at Dhs99, and include breakfast.

News
Sport & Fitness
EDITOR’S PICKS
What’s On Nightlife Awards 2021: Here are the nominees...
READ MORE
It's back! What's On Lock In returns to Media One Hotel
READ MORE
Arts and culture: 5 spots we can't wait to visit at Expo 2020 Dubai
READ MORE
UAE petrol prices are set to decrease in September 2021
READ MORE
MOST POPULAR
In pics: Sheikh Hamdan shares photos of his tour of the Expo 2020 Dubai site
6 new dining concepts confirmed for Abu Dhabi mega project Al Qana
Ultra-luxury resort Raffles The Palm Dubai to open in October
This cool new JVC hotel is offering special rates on stays
Wait Until Dark: This thrilling play will leave you on the edge of your seat
YOU SHOULD CHECK OUT
Our website uses cookies and other similar technologies to improve our site and your online experience. By continuing to use our website you consent to cookies being used. Read our privacy policy here.