What’s On has a Robin Thicke interview ahead of Blended Dubai 2015. See pictures and videos ahead of the music festival in Dubai Media City.

Robin Thicke has sold more than 14.8 million copies of his 2013 hit Blurred Lines, making it one of the most successful songs of all time.

The worldwide number one, featuring Pharrell Williams and TI, made Robin an international star, but he’s spent most of this year trying to distance himself from it.

“My recollection is that when we made the song, I thought I wanted to be more involved than I actually was,” admits Robin. “But the reality is, is that Pharrell had the beat and wrote almost every single part of the song.” 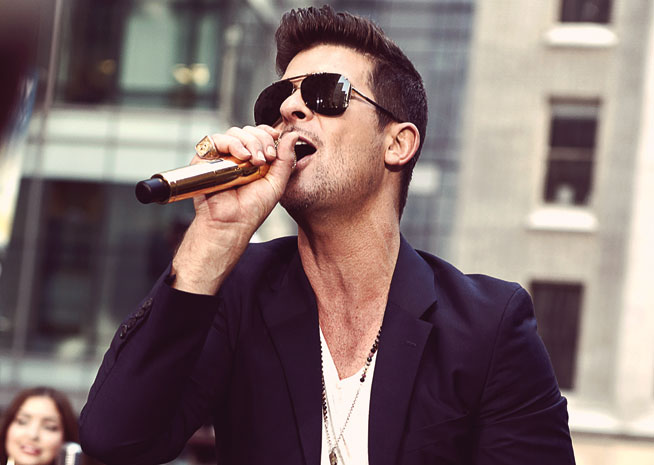 On March 10, 2015, a US court ruled that Pharrell and Robin copied Motown singer Marvin Gaye’s 1977 song, Got To Give It Up. The pair were fined almost Dhs30 million.

The verdict is the latest drama in a series of scandals for Robin. The song’s lyrics received criticism for being derogatory towards women, while the video also generated its own controversy. At the time, Robin seemed to relish the attention, saying: “We were just trying to make a funny song and sometimes the lyrics get misconstrued when you’re trying to put people on the dance floor.”

Then, at the 2013 MTV Music Video Awards, his twerk-a-thon with Miley Cyrus upset the one person who had stood by him through everything: his wife of 20 years and mother of his son, actress Paula Patton. When she saw pictures of him getting close to another woman at a party, she’d had enough and they parted ways. Since their separation, Robin’s tried everything to get her back from sending flowers to naming his latest album after her, but his attempts were in vain. Last October, Paula filed for divorce.

As for Robin, he’s busy focusing on music. “It’s my therapy,” he explains. “I’m trying to become a better man and a better father.” May 1”

News
Nightlife
Things to do
EDITOR’S PICKS
So, when is the next UAE public holiday in 2021?
READ MORE
All of the lavish new hotels set to open in Dubai in 2021
READ MORE
16 of the best pool passes in Dubai that are fully redeemable
READ MORE
All of the restaurants at West Beach, Palm Jumeirah
READ MORE
MOST POPULAR
The best deals we've found in Amazon's Prime Day sale
This new salon package includes lunch, manicure and blow dry for Dhs150
Glastonbury comes to Dubai with Reform's one-off brunch
Folly launches five-week masterclass programme for aspiring chefs
World-famous attraction Madame Tussauds to open in Dubai this year
YOU SHOULD CHECK OUT
Our website uses cookies and other similar technologies to improve our site and your online experience. By continuing to use our website you consent to cookies being used. Read our privacy policy here.