Where are you from? The Philippines.

When did you come to Dubai? In August 2008. I came here in search of greener pastures, and to be more independent.

What do you do here? I’m a photographer and a cinematographer.

How long have you been interested in cycling? I started off doing BMX, got into freeride mountain biking for a while, then got hooked on fixed gear bikes, and I haven’t looked back. I love bikes in general, and I think riding a fixed gear bike gives me more of a challenge. That’s the main reason I got into it – the unique feeling you get from being one with the bike. 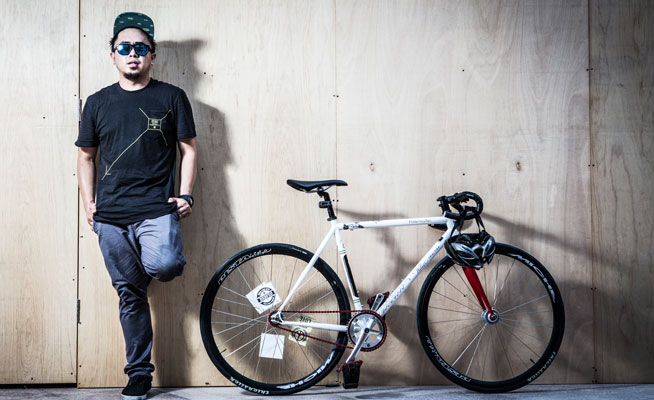 How are fixed gear bikes different to normal bikes? There are no brakes, and no gears – you can’t coast at all on a fixed gear bike. I wouldn’t say that they’re better than any other bikes, really, because all of us are allowed to have different point of views, but I just prefer the simplicity and versatility of a fixed gear bike.

Hold on! No brakes? How do you stop? They can still be ridden safely. The pedals are locked to the rear wheel in both directions – locking your legs will slow down the rear wheel and make you skid to a halt. It might be scary at first, but you’ll soon enjoy it. Most of us do this because we believe it gives us a better connection and feel for the road, and a more ‘zen’ riding experience.

Fixed gear bikes were originally used on velodromes in track cycling, and had no brakes, which is why we do the same. Some people use brakes because they prefer to be able to stop quickly.

Is it difficult to learn how to ride a fixed gear bike? It’s difficult at first, yes, but once you get the hang of it, you’ll soon feel like it’s just a part of your body.

When did Dubai Fixed Gear start out? We started out in 2010.

Were you involved in setting it up? Yes. We were just a couple of adventurous guys who wanted to go around Dubai on our bikes. There were only three of us when we first started out, and we just wanted to see the scene grow, like with other cycling groups. Now, there are about 100 of us in the group.

So the fixed gear community is growing, then? The community is getting bigger and bigger at the moment. There’s another group in Abu Dhabi – Abu Dhabi Fixed Gear – and we have friends in other emirates as well. To be honest, it’s more of a family than a group. We have a group page on Facebook for people who want to join. So if anyone out there is available for a spin, it’s just one post away.

Does Dubai Fixed Gear meet up with other groups often? Yes, we’re like family. We always keep in touch with our friends from Abu Dhabi Fixed Gear, ADFXD, and ORYXFXD in Doha. We love meeting new faces with the same interest as ours, and we’ll sometimes meet up for drinks and good food.

Have you ever taken part in any cycling races? Yes, we held some fundraiser races in Dubai recently – the King of Nas Race, in Nad Al Sheba, and the Urban Uphill Race, during Street Con back in April, which we organised with the help of Al Ghurair Mall.

The Urban Uphill Race was held in the Al Ghurair Mall’s eight-storey parking lot. We decided to do it because it’s hard for us to all go to the mountains for some uphill cycling. So when we had the opportunity to do something at Al Ghurair, we took it. It was a fun event, and we plan on doing another race like that again soon.

Is Dubai a good place for cyclists? Generally, I think Dubai is OK, because of its plans for cyclists and the cycling scene in the future. However, Dubai still has a long way to go before it can be called a ‘bike-friendly’ place, especially compared to other countries.

Do you have a favourite place to cycle locally? Nad Al Sheba is one of my favourites because there’s a proper cycling track there. But in all honesty, I prefer riding on the streets instead, around areas like Jumeirah or Deira, or even from Deira to Jumeirah and back again.

I believe that cycling shouldn’t be limited or restricted for anyone; it should be enjoyed. Just get out there and ride your bike – go to the beach, go to the mall or go to your friend’s house. Go anywhere!

Where’s your favourite place in the world to cycle?  Abu Dhabi is a nice place to ride around – there’s a really bike-friendly community over there. I’d also like to try cycling in France, if I ever get the chance.

What would you like to see happen for Dubai’s cycling scene in the near future? We’re all looking forward to having cycling tracks all over Dubai so we can ride around the city more safely.

If people are interested in starting out, where’s the best place to go? I’d definitely recommend Corcel Collective, Adventure HQ, Beyond A Bike, Ride Bike Shop, Wolfi’s, Bikers JLT, Sun and Sand Sports or Besport Bike Shop. You can get yourself a whole bike at these places or just the components and equipment that you’d need for your bike.

Are fixed gear bikes expensive? There’s a wide range of prices. They start from Dhs500, but can go up to Dhs40,000, depending on the brand and the components.

If I had an old road bike, how would you convince me to switch to a fixed gear bike? I wouldn’t be able to convince you because even I ride different kinds of bikes. BMX bikes, mountain bikes, road bikes, cruiser bikes, hybrid bikes – they’re all good, as long as you’re happy and comfortable on what you’re riding. Ride safe! 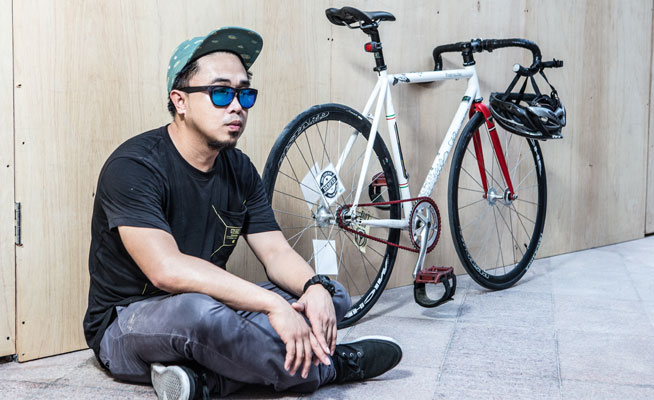 First impressions of Dubai? Wait – where’s the desert? And where are all the camels?

Have those impressions changed? Yes. When I first came here, I didn’t really have any idea of what Dubai would actually be like. There’s definitely more to it than just sand dunes and camels.

Favourite place to catch up with friends? Either Jazz @Pizza Express, Double Decker or McGettigan’s.

Favourite Dubai-based DJ or band? I like Muhaisnah Four, Adam Shero Baluch, The Swing Revue and Abri & Funk Radius, but I love them all. I can’t pick just one favourite.

What do you do when you need some ‘me’ time? If I’m not cycling, I like to just stay in and relax at home.

How would you sell Dubai to someone who has never visited the city? You need to try it to believe it.

What’s the secret to success here? Hard work and focus on your goals.

Top tip for getting the most out of Dubai? One of the key things you need to learn when you’re living here in Dubai is that you have to separate the ‘must-haves’ from the ‘wants’. If you learn to put aside what you don’t really need, and buy only what you absolutely require, you can not only put aside some money, but you’ll also be able to spend some on the fun activities that this emirate is so well known for.

News
Sport & Fitness
EDITOR’S PICKS
The highest restaurant in the UAE is set to open on October 1
READ MORE
Video: Take a peek inside 50 Cent's lavish Dubai hotel suite
READ MORE
All of the best Sunday night deals in Dubai
READ MORE
Here's why Kite Beach Centre in Umm Al Quwain is the UAE's best-kept secret
READ MORE
MOST POPULAR
Here's what to expect from Sal, Burj Al Arab's new poolside restaurant
The Abu Dhabi Edition spa has reopened with soothing savings
This Dhs199 staycation includes 2 tickets to Dubai Parks & Resorts
All the sporting events to get excited about in the UAE this week
8 fun things to do in Dubai this week
YOU SHOULD CHECK OUT
Our website uses cookies and other similar technologies to improve our site and your online experience. By continuing to use our website you consent to cookies being used. Read our privacy policy here.