The Burj Al Arab is about to get bigger

The Burj Al Arab is about to get fancier – yes, we didn’t think it was possible either.

The Burj Al Arab is adding another feather to its luxury-hotel cap with a giant, 10,000 square metre deck set to open there in the second quarter of 2016.

The ‘North Deck’ will fan 100 metres out into the Arabian Gulf and will hold 32 cabanas (some ‘royal’ class and some ‘business’ class), 400 sun loungers, one fresh water pool and one salt water pool that will measure 828 square metres.

Oh, and there will be a restaurant and a bar too.

Here’s the catch, The North Deck will be open to Burj Al Arab guests only. But, for the first time, the hotel will offer annual membership packages so Dubai residents can use the facilities year-round (these will begin in May 2016, although we imagine they’ll cost a pretty penny).

Where is the deck currently? Well, it’s being shipped over from Finland (no big deal), where it was built by marine construction experts Admares. It is made from steel, and weighs a whopping 5,000 tonnes – it left Finland on January 9th and should arrive in the Gulf by mid February.

“This is the first time a structure of this nature and size has been built in one country and then transported to another country to be assembled and operated. We are really pushing the boundaries of innovation and demonstrating how committed we are to positioning Dubai as the most exciting destination in the world,” said Robert Swade, Jumeirah Group’s Chief Operating Officer. 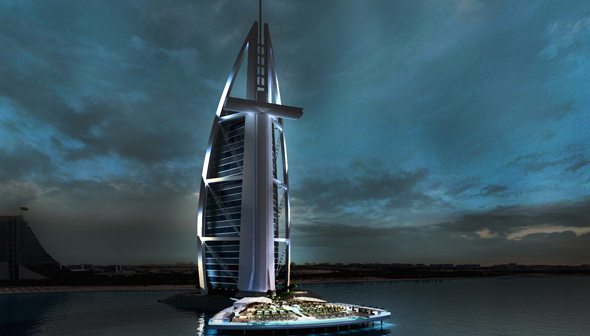 News
Staycations
EDITOR’S PICKS
So, when is the next UAE public holiday in 2021?
READ MORE
All of the lavish new hotels set to open in Dubai in 2021
READ MORE
16 of the best pool passes in Dubai that are fully redeemable
READ MORE
All of the restaurants at West Beach, Palm Jumeirah
READ MORE
MOST POPULAR
Abu Dhabi tourists can now get free vaccines through SEHA
Before and after: Stunning photos capture Dubai’s incredible transformation
Etihad wins Best Cabin Crew and Frequent Flyer Programme awards
Flash sale: This Dubai hotel has 40 per cent off and free attraction tickets
The best deals we've found in Amazon's Prime Day sale
YOU SHOULD CHECK OUT
Our website uses cookies and other similar technologies to improve our site and your online experience. By continuing to use our website you consent to cookies being used. Read our privacy policy here.