Will this new bridge solve the Dubai Mall traffic?

Dubai Mall is expanding and is planning to host 100 million people a year in the near future – here’s one of the plans to help ease the traffic surrounding it.

A Dhs120 million bridge has been announced that will be built by early next year and will run over Al Khail Road and ease traffic on Financial Centre Road. It will also include a direct entry point to the expansion of Dubai Mall’s parking.

The bridge will run over 920 metres in length and will begin near Ras Al Khor Road and Al Khail Road, swooping past Dubai Design District. The existing road leading up to the bridge will be widened by two lanes to help the traffic flow onto the new bridge.

It will run over the new Dubai Canal, as seen here – the coloured lines represent the new roads planned and the light blue waterway is the Dubai Canal: 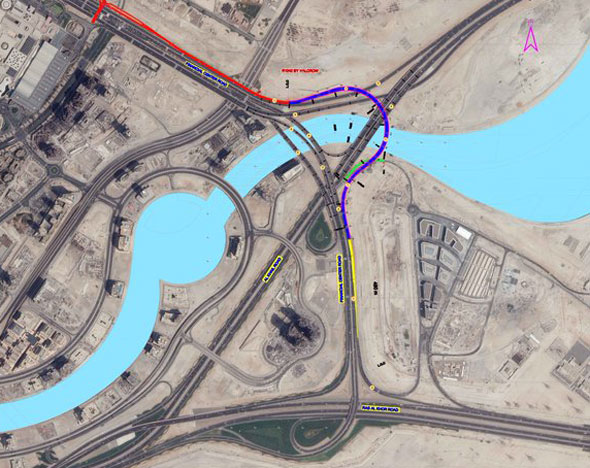 “The project will improve the traffic flow along the Financial Centre Road and at grade intersections by reducing the density of traffic at junctions leading to Mohammed Bin Rashid Boulevard,” said Mattar Al Tayer, the Director-General and Chairman of the Board of Executive Directors of the RTA.

“The project will result in raising the road intake to 4,500 vehicles per hour during peak hours, besides serving several development projects, and easing the pressure on the existing roads network,” he added.

They hope to accomodate 100 million visitors per year soon, and this bridge is part of the plan to help that happen.

News
EDITOR’S PICKS
Covid-19 rules in Dubai: all the updates you need to be aware of
READ MORE
9 royal-approved Dubai restaurants
READ MORE
16 of the best beach bars in Dubai for sundowners
READ MORE
Where to get the Covid-19 vaccine in Dubai, Abu Dhabi and across the UAE
READ MORE
MOST POPULAR
Atlantis, The Palm relaunches underwater yoga classes
6 fun things to do in Abu Dhabi this week: January 24 to 27
Platinum Heritage launches unique camping experiences in Dubai
Palm Jumeirah is set to welcome a McGettigan's and Trader Vic's
6 of the very best breakfast deals in Dubai
YOU SHOULD CHECK OUT
Our website uses cookies and other similar technologies to improve our site and your online experience. By continuing to use our website you consent to cookies being used. Read our privacy policy here.