Dubai to go car free for a day

Take the bus to work. Or bike. Or camel.

We get it, it’s inconvenient, but it’s just for one day of the year. So this February 21, get ready to ditch the car and make use of Dubai’s buses, trains and trams.

It’s not compulsory, but in an effort to go more green Dubai Municipality are urging car-users to take a day off – helping to conserve fuel and keep the atmosphere a little cleaner. There won’t be any road closures though, so if you really need to use your car, you won’t be restricted.

Despite being called Car Free Day, Dubai Municipality are encouraging people to leave the car at home over several days, emphasised by their slogan “not a day… every day”.

With each car pumping out a whopping four tonnes (roughly the weight of the car itself) of carbon dioxide into the atmosphere each year, it’s probably about time we gave the environment a break.

However if you really can’t go without a car of some sort, at least try and set up a ride-share for the day. 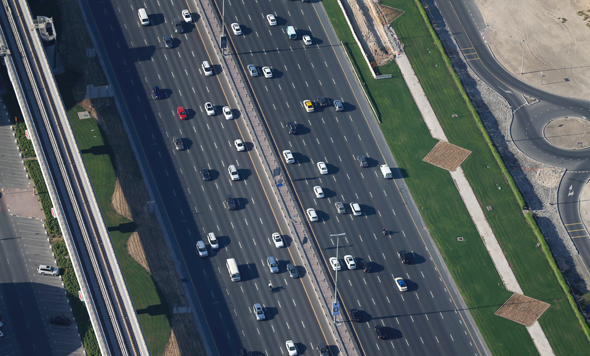 Maybe this is what SZR will look like at 6pm this Sunday?

The car-free campaign started back in 2010, and saw only 1,000 vehicles left at home. However, the initiative has since grown, with over 300 organisations and 30,000 cars taking part last year. And 2016 is expected to be bigger, with over 1,000 organisations having pledged to take part alongside members of the public. Overall, the car-free days so far have saved over 147,000 litres of fuel.

So while out of the 2,000,000 cars that use the roads in the UAE each day, a few thousand cars off the road might not seem like a lot ­– Car Free Day is working to help at least a little bit, and it’s keeping both the environment and your conscience just that little bit cleaner.