The UAE's Minister of Happiness makes her first cheerful statement

In her first moments in the new role the UAE’s Minister of Happiness wore her mission statement on her sleeve, if you will.

The UAE’s new cabinet ministers took the oath of office earlier this week, and the much talked about Minister of Happiness, H.E. Ohood Al Roumi, made a bold and cheery statement from the get go.

The new Minister of Happiness wore a Lanvin necklace over her abaya that read ‘Happy’ as she stepped into the new role (see, she’s already putting a smile on our faces).

Al Roumi’s priority will be to implement and oversee national projects that improve the quality of life and general wellbeing of the UAE’s citizens and residents.

The new ministers of the UAE’s 12th Cabinet were sworn in before H.E. Sheikh Mohammed bin Rashid Al Maktoum, Prime Minister and Ruler of Dubai and Sheikh Mohammed bin Zayed, Crown Prince of Abu Dhabi and Deputy Supreme Commander of the Armed Forces on Sunday.

“Our ambitions are limitless and the UAE has high expectations of you,” Sheikh Mohammed told the ministers. “We see you as trustworthy and hope that the UAE and its citizens will always remain your top priority.”

“The formation of the new ministry is the first step in a new thinking in government and its tools are youth, happiness and knowledge development,” he added.

With Mohammed bin Zayed, swearing in the new Ministers. We look to the future with a spirit of change and progress pic.twitter.com/RfTiNgAM4l 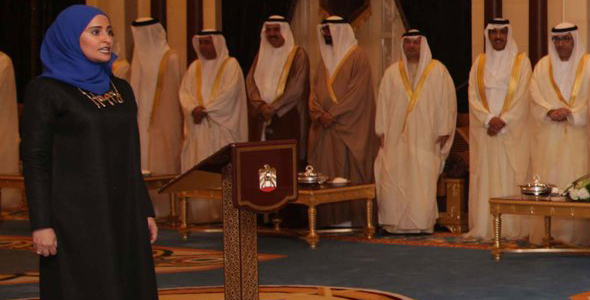 Ohood Al Roumi was recently the Director-General of the Prime Minister Office, where she worked on reform, innovation, service improvement, leadership development and bringing about new government initiatives.

She is also the first Arab member of the Global Entrepreneurship Council (GEC).

She was once Head of Economic Policy at The Executive Office HH Sheikh Mohammed, and before that she was the Manager of the Business Research at Dubai Chamber of Commerce. She holds a Master’s Degree in Business Administration (MBA) and a Bachelor’s in Economics.