Experts at the National Centre of Meteorology are predicting that the unstable weather will stick around until at least Thursday night.

Accuweather.com predicts that the cloud level (and consequently the chance of rain) will peak between 3pm and 4pm today, but they also said it would be sunny at 12pm, which it most definitely was not.

This satellite image from NCMS shows the cloud cover over Dubai at 1pm on Wednesday – green means clouds, light blue means drizzle, blue means light rain and yellow means moderate rain. You can see that there’s a strong patch of rain off the coast of Dubai that may hit land soon (although it’s highly unlikely to be as dramatic as what we saw last week): 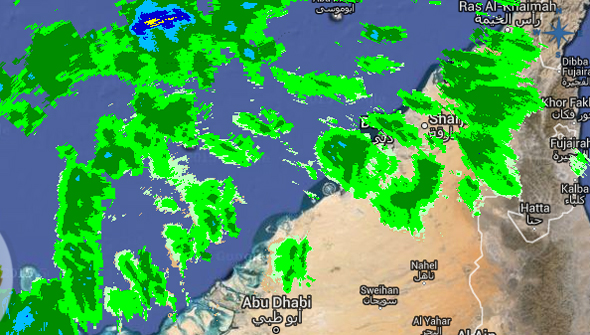 The National Centre for Meteorology’s weather report for today says we’ll see “partly cloudy weather in general, cloudy at times”. They say “cloud amount will increase gradually over different areas of the country” and that there “may by some scattered rain”.

They also say there will be “blowing dust and sand at times” due to the wind.

Tomorrow, the UAE weather centre believes there will be a chance of “scattered rain” too. We’ll keep you posted.

The city saw some light rain on Monday, with experts saying the low pressure system was going to stick around for four or so days, meaning it should be clear skies by the weekend in the UAE.

Meanwhile, both Oman and Qatar’s official weather services have issued warnings of chances of thunder – with both centres expecting the fluctuating weather to last until Saturday.

Rain is another definition of happiness ?

The sky is telling something! #Is it going to #rain? Be #prepared, #UAE! pic.twitter.com/ykRFjKmwy7