The Cocoon boss will tell you all you want to know before his gig in Dubai later this month. He’s agreed to a special interview in which he’ll answer questions posted by his UAE fans.

Germany’s Sven Väth is affectionately known as Papa Sven, and for good reason: he is the veteran party animal that never stops smiling. He is the techno DJ not afraid of a risky drop, and is someone who adds colour and character to a scene that quite often takes itself a little too seriously.

Sven has been through many different musical phases, from synth-pop band frontman to Goa trance disciple, from club owner to label manager to festival curator, but, for the most part, he is someone known across the world because of his expressive DJ sets, eccentric parties and his all-encompassing brand, Cocoon.

That this Frankfurt-based German techno celeb has rarely produced a record also makes him that special thing – a DJ first and foremost. From small grotto clubs in Italy to emerging new scenes in Eastern Europe, he’s the undisputed face of techno hedonism and has been since the earliest days of the genre.

For the past 16 years, of course, Monday has actually been the most important day of Sven’s week. Once again last summer, thousands flocked to his infamous carry on at Amnesia out in Ibiza, where handpicked acts including Hot Since 82, Nina Kraviz, Eats Everything and Skream, as well as many other stars du jour, supplied a mixture of the contemporary sounds the boss is known for. 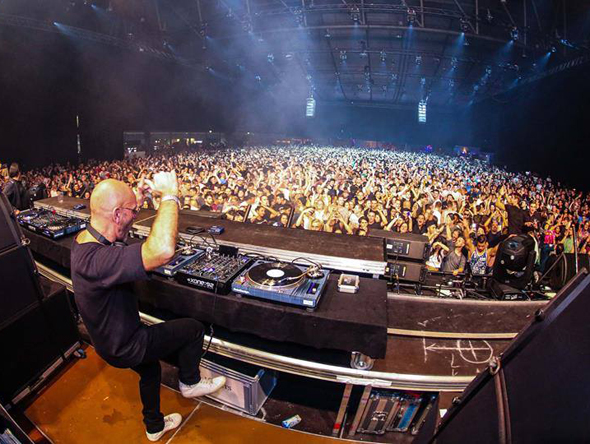 With the number of other techno gatherings now on the White Isle, it’s easy to forget that it was Sven and Cocoon who started it all. Before then, back at the turn of the millennium, ‘techno’ and ‘Ibiza’ were words not often associated with each other.

Sadly, the Cocoon club he ran in Frankfurt didn’t work out. A decadent place where you could eat and party in style, it was forced to close in 2012, but the rest of the Cocoon operation remains as vital as ever. Every year the record label releases an on-point blend of modern techno sounds from artists old and new but also snapshot mixes that very much define the year’s most popular techno trends.

Another of Sven’s most celebrated traits is his addiction to vinyl – to buying it, releasing it, playing it, and to waving it above his head during one of his long sets. Despite the digital revolution that came in the last decade, Sven has remained resolutely committed to the format.

Seven years had passed since Sven last played in Dubai when he blew Blue Marlin apart last March. And the good news is that he’s back later this month to show us how it’s done once again.

Nightlife
EDITOR’S PICKS
Ramadan in Dubai: 38 iftars to try
READ MORE
Where can Dubai residents travel? Check out these 14 destinations
READ MORE
Rumours, facts and reveals: New Abu Dhabi bars and restaurants
READ MORE
UAE announces reduced working hours for Ramadan 2021
READ MORE
MOST POPULAR
7 cool things to do in Abu Dhabi this weekend: April 15 to 17
10 amazing things to do in Dubai this weekend: April 15 to 17
The St. Regis Dubai, The Palm to open on Palm Jumeirah in May
Do some good: 7 initiatives to support this Ramadan in Dubai
Eyes to the skies: A huge meteor shower is expected this month
YOU SHOULD CHECK OUT
Our website uses cookies and other similar technologies to improve our site and your online experience. By continuing to use our website you consent to cookies being used. Read our privacy policy here.