The aftermath of the rain in Dubai

The rain has cleared, but the consequences of the wet weather are still being felt.

The skies across the UAE today are mostly sunny, but the heavy rains that fell across the emirates yesterday are still affecting the city today.

With some streets still waterlogged, traffic has been affected today, and damage to some buildings will take time to fix. Also, all schools in Dubai and Abu Dhabi remain closed for Thursday after an announcement from the Minister of Education – but check with individual schools for updates.

Here’s a compilation of some of the soggy moments:

*MORE ON THE RAIN YESTERDAY*

And what about the weather today? The National Centre for Meteorology says the “intensity of the unstable conditions” have “weakened”. They say there’s a chance of “scattered rain and showers”, but predict nothing more intense.

Here’s what we know so far (we’ll keep updating you):

The worst hit area of Dubai was Jebel Ali, and as of this afternoon the part of Sheikh Zayed Road near Ibn Battuta toward Abu Dhabi is still heavily waterlogged and moving very slowly.

The RTA announced that as of 2.45pm the stretch of Sheikh Zayed Road going towards Abu Dhabi near Jebel Ali was partially functional again, with only two lanes reopened after water drainage. And at 5.20pm they announced that all lanes were reopen, with the road fully functioning again. 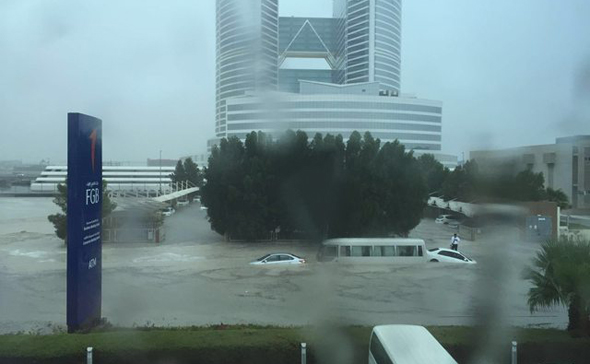 Here’s what the traffic looked like on the road at 8am this morning (remember, red is bad. Dark red is very bad): 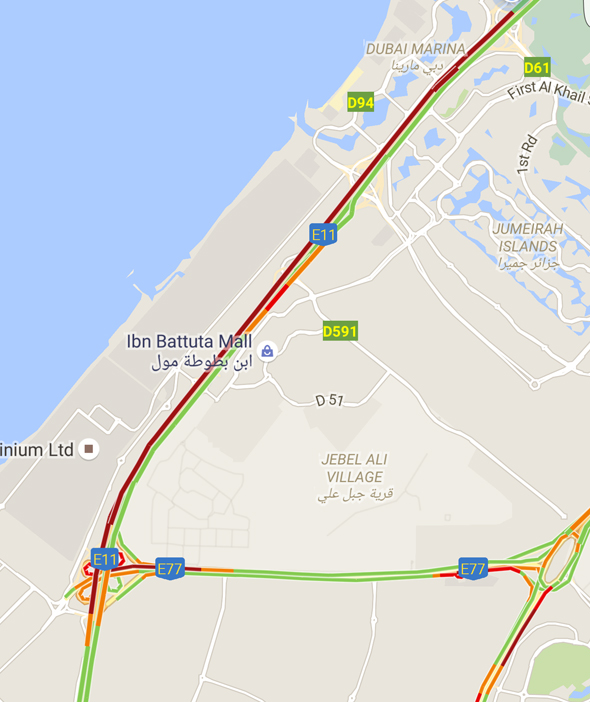 At 3.19pm the road had cleared slightly, but the area from JBR to Jebel Ali is still very congested.

All Dubai authorities are working hard to de-clog the roads, but the RTA’s current advice is to use Emirates Road and Sheikh Mohammed Bin Zayed Road:

RTA requests the road users coming from & going to Abu Dhabi to use Shk. Mohammed Bin Zayed road & Emirates Road due to the accumulation 1/4

RTA is working hard to drain the water in that area for the traffic to return to normal at the earliest. 3/4 #DubaiRains

At 9am, the traffic on Sheikh Zayed Road Abu-Dhabi-bound had already backed up to near Dubai Internet City:

Roads in Al Quoz are also still waterlogged, here’s a photo taken at about 8am this morning: 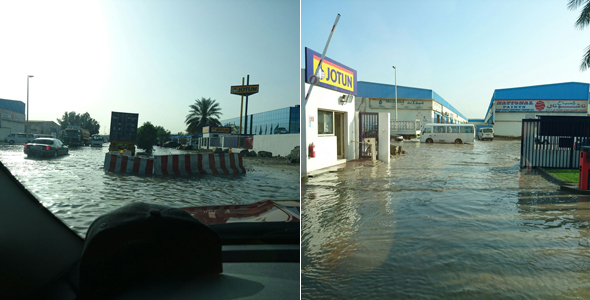 Many businesses had to shut yesterday due to the bad weather, with delivery services like Deliveroo closing operations for safety reasons, and salons and centres in Jumeirah having to close down due to power outages.

We’ll look into what places are still closed today and update you soon. Most businesses should be fully functional again, but if you have any appointments ring ahead first to check.

In fact, even the Abu Dhabi Stock Exchange stopped for a period of time yesterday due to the exchange’s communications network being hit by the bad weather: because of this, all trades executed on Wednesday in Abu Dhabi have been cancelled.

Can’t believe there was actual damage to buildings due to the rain? Well this dramatic Twitter video shows the force of the wind blowing out a window in a building in the UAE:

And here’s a video that shows how the strong winds hit a building in the centre of Abu Dhabi:

damages at Abu Dhabi airport due to heavy rains pic.twitter.com/2SEmTwGqC9

Almost all Dubai suburbs were affected by floods yesterday, here’s just how flooded some areas were. This is in IMPZ (click to play the video):

Remarkably, overnight many of the streets completely drained. There were 90 trucks across Dubai yesterday sucking up the water – 50 from Dubai Municipality, and 40 donated from the private sector. Over 1,000 people were at work around the clock clearing the water. We have them to thank for the amount of areas that are now unclogged:

A photo posted by Dubai Municipality بلدية دبي (@dubaimunicipality) on Mar 9, 2016 at 9:52am PST

A photo posted by Dubai Municipality بلدية دبي (@dubaimunicipality) on Mar 9, 2016 at 5:14am PST

Here’s what the streets of Dubai Marina and Dubai Media City looked like yesterday:

We’ll keep you updated as news pours in, but in the meantime let’s all watch this video again, which is without a doubt the greatest thing the rains produced yesterday:

When you’re late for a meeting and don’t wanna get your shoes wet. #dubaiproblemsTaking this really made my day!!