Rain, thunder and lightning in the UAE on Wednesday

With Spring now here (which, yes, means summer is looming), the weather has been predictably unpredictable this week – and the UAE saw strong rain, hail, thunder and lightning throughout Wednesday, which has caused chaotic traffic.

This is what the traffic looked like on the roads as of 4pm today (which is usually when the traffic is just starting to build). Green means roads are relatively free, orange is bad, light red is very bad and dark red means a road is nearly at standstill: 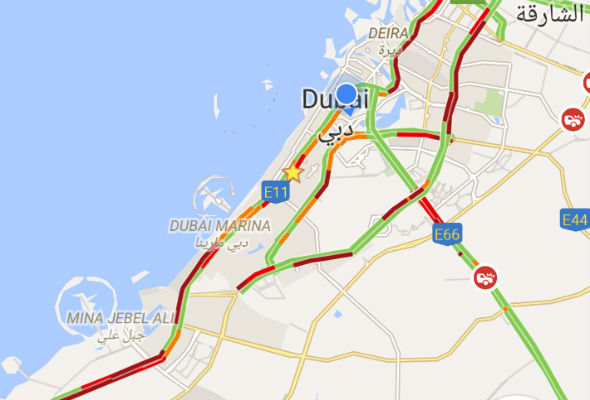 Some roads are very flooded in Dubai, particularly around  the Jebel Ali area, causing gridlocked traffic and cars getting stuck in pools of water. In fact, a part of Sheikh Zayed Road is waterlogged, as you can see in this tweet from the RTA:

Dubai Police said they received more than 3,200 emergency calls and have recorded 253 traffic accidents just between 6am and 1pm today, so more incidents are likely to be pouring in now.

Please drive carefully out there everyone, take it slow. And if you are at work and have a low-slung car that is unlikely to be able to handle large pools of water, see if you can leave it where it is (if it’s parked safely) and either catch public transport home or car pool with a colleague.

Here are some recent Twitter updates on the afternoon traffic:

Please note that these tweets are far from a comprehensive guide to the waterlogged roads, and there are many flooded roads around the city – we personally have seen floods in Media City, Knowledge Village, Jumeirah 3 and Jumeirah 1.

While the rain is serious business when it comes to the roads and traffic, this video of a man using an ingenious tactic to stop his shoes from getting wet today is one of the funnier things we’ve seen in a while:

When you’re late for a meeting and don’t wanna get your shoes wet. #dubaiproblemsTaking this really made my day!!

The UAE National Centre for Meteorology has this to say about the weather today:

“Unstable weather likely to persist over the country, the amounts of clouds will increase over scattered areas accompanied with towering clouds & thunder with different intensity of rain/shower over scattered areas, causing flood conditions near eastern & northern mountainous areas.”

“The peak situation will be on Wednesday until Thursday evening,” the official UAE weather authority has predicted.

While the rain is lashing down in Dubai (and the thunder continues to rumble), Al Ain has been the most affected – with many major roads closed due to water logging after 77mm of rain hit the city.

All flights in and out of Abu Dhabi International Airport were temporarily suspended this morning due to the bad weather, but are now running again.

The Abu Dhabi Education Council has announced that schools in Abu Dhabi will be closed on Wednesday because of heavy rain for “the protection of students and teachers in anticipation of the weather conditions.” Some Dubai schools are closing as well, but there hasn’t yet been a direct order from the Dubai authorities for them to close. 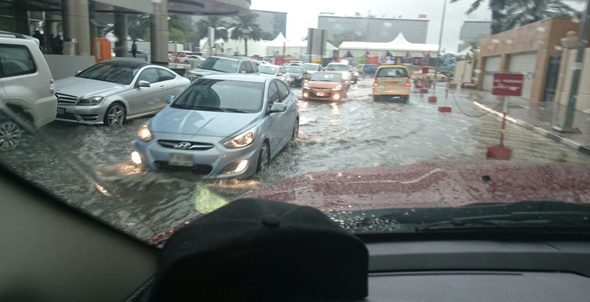 This satellite picture from NCMS at 9.10am shows how the rain is scattered across the GCC (yellow means moderate rain, and red and orange strong rain):

*PICS & VIDEO: The hail in Dubai a few weeks ago*

Here are some other great snaps of today’s moody skies:

Completely #unexpected to #rain in #Dubai at this time of the year, but we all are #lovingit . Agreed? #DubaiRains pic.twitter.com/JyBJ0hYx3P

And what can we expect tomorrow? Well the National Centre for Meteorology says the “weather will remain unstable during daytime,” and that northern and eastern areas are very likely to see  the amount “thunder and towering clouds”.

As for the weekend? They’re predicting partly cloudy weather, but no rain. 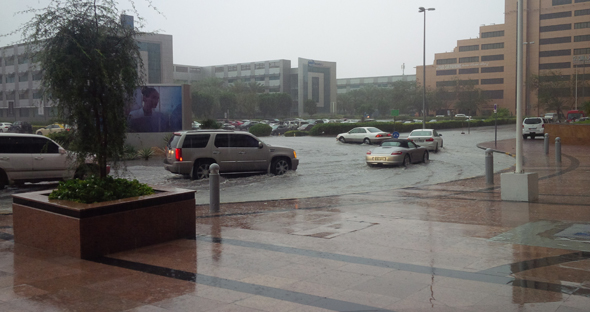 News
EDITOR’S PICKS
13 Sheikh Hamdan-approved restaurants in Dubai
READ MORE
Dubai brunches temporarily banned in new preventative measures
READ MORE
12 upcoming Dubai mega-projects we can't wait for
READ MORE
16 of the best beach bars in Dubai for sundowners
READ MORE
MOST POPULAR
Covid-19: Dubai cancels Ramadan tent permits for 2021
Laugh out loud with Laughter Factory in your own home this March
8 things to look forward to in Dubai this March
This popular Aussie cafe has opened in a new location in Dubai
Wawa: The unassuming new eatery serving authentic Japanese food in Dubai
YOU SHOULD CHECK OUT
Our website uses cookies and other similar technologies to improve our site and your online experience. By continuing to use our website you consent to cookies being used. Read our privacy policy here.