World Drone Prix kicking off in Dubai this weekend

This is exactly what they’ll be doing at the World Drone Prix in Dubai this weekend: this isn’t some tame, anyone-can-enter free-for-all, these guys are serious. With a grand prize of Dhs3.7 million up for grabs though, who wouldn’t be?

Here’s a video produced by the competition that show just how cool drones can be:

The World Drone Prix is the professional drone racing tournament, with the grand prize five times more than that of any other drone competition in the world.

The qualifying teams have now been flown out to Dubai to take part in the opening event on March 10, as well as the main event on March 11 which includes both freestyle and track races.

If you’ve read this far, and are still unsure as to what a drone, or drone racing is – here’s a quick video showing the qualifying video of one of the drone teams set to race at the World Drone Prix:

The World Drone Prix in Dubai is also the first time a complete drone racing track has ever been custom-built for a drone racing event, here it is (a thing of beauty – we just hope the weather clears up): 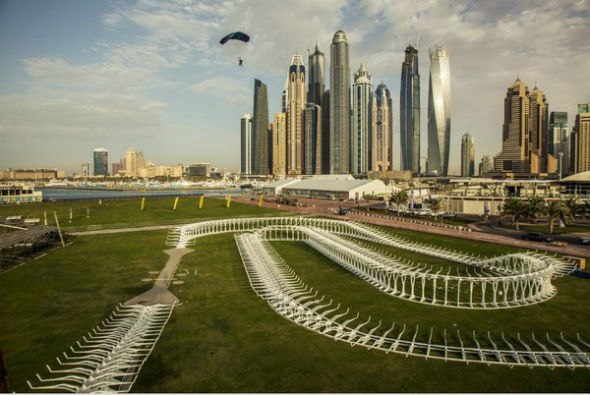 Since arriving in Dubai, the teams have been practicing hard in the run-up to the event this weekend, and can be seen whizzing about in the qualifiers in the two videos below:

So if you’re interested, and fancy cheering on a small flying machine as opposed to say – a horse, or your favourite sports team, then make sure to head down to the Drone World Prix this weekend.

News
Sport & Fitness
EDITOR’S PICKS
Ramadan in Dubai: 38 iftars to try
READ MORE
Where can Dubai residents travel? Check out these 14 destinations
READ MORE
Rumours, facts and reveals: New Abu Dhabi bars and restaurants
READ MORE
UAE announces reduced working hours for Ramadan 2021
READ MORE
MOST POPULAR
Abu Dhabi International Book Fair to return in May as a live event
17 of Dubai's best beachfront restaurants
New films to watch in cinemas this week: April 15 to 21
There are 6 royal Ramadan experiences to try at Emirates Palace
Layali Ramadan: BIG sales on shopping, stays and dining in Abu Dhabi
YOU SHOULD CHECK OUT
Our website uses cookies and other similar technologies to improve our site and your online experience. By continuing to use our website you consent to cookies being used. Read our privacy policy here.