Winners of Drones for Good 2016

Last week, tech and drone enthusiasts descended upon Dubai Internet City for Drones for Good, a competition that sees groups from around the world compete for an international prize pool of Dhs4.6 million, and a smaller prize pool of Dhs1 million for national entrants. Impressive stuff.

While each drone concept we saw was awesome in its own right, over the course of three days the international awards category was whittled down to leave just three in the finals.

*MORE: The Drone Prix coming to Dubai this year*

A drone from Loon Copter with both aerial and underwater capabilities. It’s nimble, easy to deploy, and works just as well under the water as it does above it – moving at speeds much faster than a submarine could manage. No longer will tasks like underwater investigation, surveying and oil spill tracking have to be manned missions, a recon drone can now do the legwork.

From team 4Front comes an Unmanned Search and Rescue (USAR) drone with high-manoeuvrability that is equipped with infrared cameras and a laser radar as well as sensors specific to its mission such as gas sniffing or environment quality monitoring sensors. In urban or natural disasters, the Navig8 is able to quickly get wherever it’s needed and search for people in trouble, making it easier for first responders to assess what they’re dealing with. In fires, or similar situations where vision is limited, the Navig8 can get in, find survivors and help them to navigate their way out.

A drone from creators Senselab for use in emergency situations. Whether you’re lost during a hike, in desperate need of medicine, or need to find help in an emergency situation – all you have to do is plug in your smartphone and select which service you need. The drone will then zoom off to either find help, the nearest pharmacy, or to map the area you’re in so you can figure your way out.

MORE: World Drone Prix to be hosted in Dubai in 2016

While all three drones in the final were undisputedly neat (and we want one of each to play with in the office) – only one of them came out victorious to claim the grand prize of Dhs4.6 million and that was Loon Copter’s Aerial-Surface-Underwater Recon Drone. 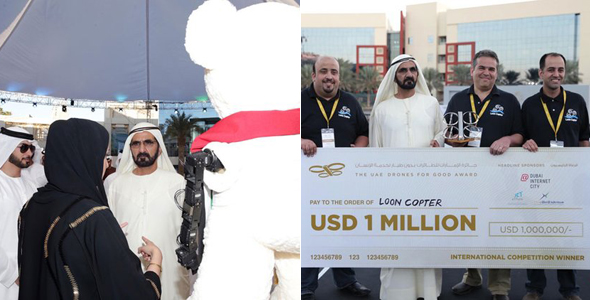 Even HH Sheikh Mohammed, ruler of Dubai and Vice President of the UAE, paid a visit to the competition. Photos: Dubai Media Office.

*VIDEO: Dubai from a drone’s perspective*

For the national award category, Buildrone took home the prize of Dhs1 million. A drone which seeks out and repairs dangerous chemical leaks in different environments. Using its sensors, the drone detects where the leak is coming from, then fills up the gap with liquid polyurethane foam.

While not quite a drone, we did believe one invention deserved an honourable mention, and that was this robo-bro serving people juice near the entrance of the competition. How cool?!