How many 16 year olds can start their Instagram bio with “painter, rapper, actor” and actually be telling the truth? Skyler Grey can.

The teen sold his first piece of art when he was 11 years old, and is also the youngest artist ever to have had his work exhibited internationally.

And now the self-professed ‘Fresh Prince of Street Art’ is in Dubai for a solo exhibition at Coya, which kicks off tomorrow.

Oh, and need any further convincing that the teenage art prodigy is ‘one-to-be-watched’? He’s said to have sold pieces to Alicia Keys and Kanye West. Enough said. That’s cool. 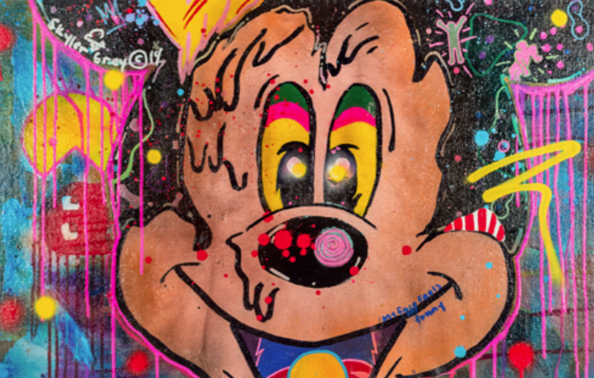 His art has attracted the attention of other big celebrity names, with rappers Snoop Dogg, The Game, Timbaland and American Boy singer Estelle among his group of fans.

With Uncle @snoopdogg at @lexzpryde video. I got a major cameo in it! #Skylergrey #snoopdogg #video

He’s so talented and hip for such a young lad, we’re close to feeling a bit bitter, but then the LA artist’s path to success wasn’t an easy one. His mum passed away when he was two, and Skyler credits his father for encouraging him to follow his love of art as a kind of therapy.

The teen isn’t formally trained and is heavily influenced by his surroundings, which explains why so much of his work includes celebrities and cartoon characters – everything from Mickey Mouse to Amy Winehouse.

Skyler’s style is essentially street art meets pop art. He uses spray paints and pop culture images to create properly eye-catching pieces. Quite transparently, Jean-Michel Basquiat and Andy Warhol are his greatest influences (even though he was born a good decade after their time).

The young artist is in Dubai this week to unveil his pieces, which will be on the walls of the high-end Peruvian restaurant Coya from tomorrow, April 6, until May 18.

It’s all about budding talent in Coya right now, because from April 17 Skyler will be exhibiting alongside the sleek and stylish clothing of London-based designer Kristina Stets.

Go on, this is your chance to get yourself some wall art that Snoop Dogg would be proud of.

And look, Skyler’s already managed to fit in a good Middle Eastern meal in Dubai, and he only just landed yesterday:

Art
Culture
News
EDITOR’S PICKS
Ramadan in Dubai: 38 iftars to try
READ MORE
Where can Dubai residents travel? Check out these 14 destinations
READ MORE
Rumours, facts and reveals: New Abu Dhabi bars and restaurants
READ MORE
UAE announces reduced working hours for Ramadan 2021
READ MORE
MOST POPULAR
5 ways to stay fit the fun way at Hudayriyat Island this Ramadan
How many days will we get off for Eid Al Fitr 2021?
Urban Outfitters' sister brand Anthropologie to open in The Dubai Mall
This double vacation offer includes stays in both Dubai and the Maldives
Dog of the Month: ubk launches unique social media competition
YOU SHOULD CHECK OUT
Our website uses cookies and other similar technologies to improve our site and your online experience. By continuing to use our website you consent to cookies being used. Read our privacy policy here.