It’s official, the latest offering from Dubai Parks and Resorts has opened its doors.

The world’s first Bollywood theme park is now open to the public, appealing to the billions of fans that live within a four-hour flight of Dubai.

The park is split into zones, with rides based on Bollywood’s biggest hits. It has 30 live shows across six stages and there will be six restaurants covering the breadth of Indian cuisine. 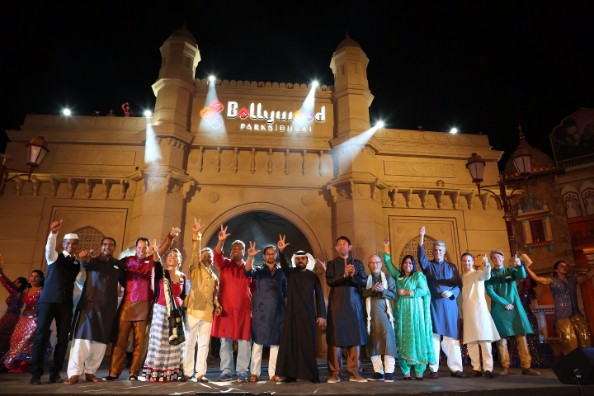 It follows the opening of Legoland Dubai and Legoland Water Park earlier this month, the first theme parks to be unveiled at the sprawling entertainment destination.

HOW MUCH ARE TICKETS?

VIP tickets are priced at Dhs1,500 per park per day and give you access to queue skipping and a personal tour guide, as well as discounts on food and beverage and retail.

To find out the ticket prices for the other parks at Dubai Parks & Resorts, check out our article.

WHAT CAN WE EXPECT INSIDE EACH ZONE AT BOLLYWOOD PARKS? 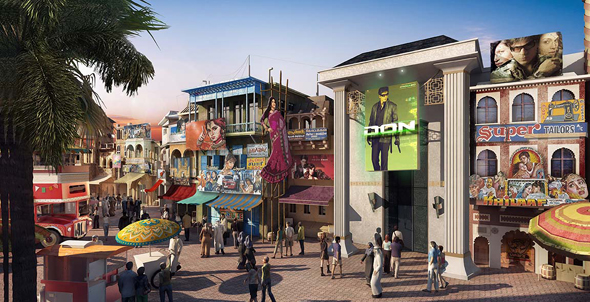 – This super-cool looking street-style zone pays tribute to Bollywood’s hometown, Mumbai, and features a ride called Don The Chase, a 3D motion immersive tunnel that has visitors chasing criminals across Dubai. The Dubai Police are part of the ride, as is Bollywood megastar SRK.

Here’s a glimpse of the Don ride under construction: 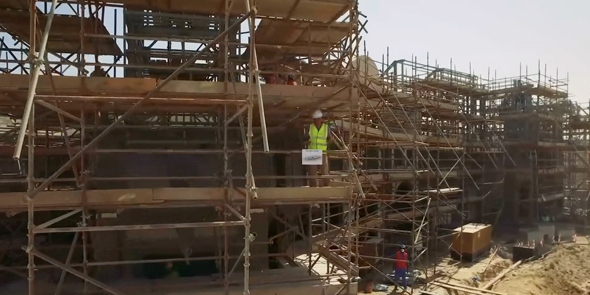 – The zone features a show stage called Mumbai Express and stars a recreation of the famous Victoria Station, offering Mumbai’s best fast food and featuring performances on the roof of a train. Here’s what it looks like:

– This zone is themed around the villages of India that have been home to countless Bollywood classics. The Hunt for Gabbar Singh is a dark and interactive 3D ride where you have to try and escape the terrifying villain Gabbar Singh (you’ll have laser guns for your protection).

– There is an area called Lagaan, an indoor zone starring Aamir Khan that features carousels and a motion simulator that takes viewers to the cricket match that makes the movie. This is a for-the-whole-family area.

– The Rangmanch stage is set around a banyan tree and features the traditional dance forms of India such as garba and bhangra.

– The Spicy Dhaba restaurant in this zone is all about rustic home style curries and tandoori. Yum. 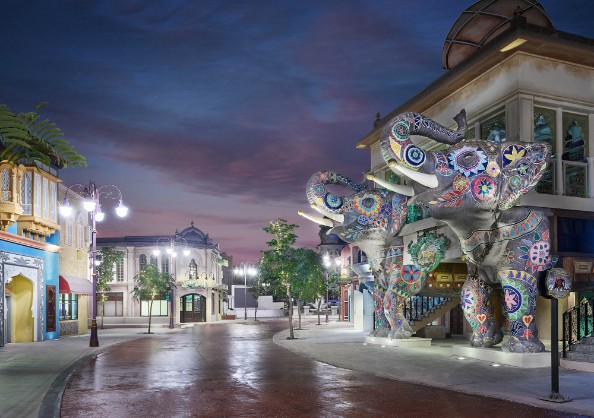 – This zone greets you as you first walk into the park, featuring Crossroads, a grand theatre with performances that bring both old and new Bollywood hits to the stage.

– It will also be home to Rock On!! a huge restaurant that is open late into the night and features a live band called Magik. There is also be a bakery called Jumbo Cafe. 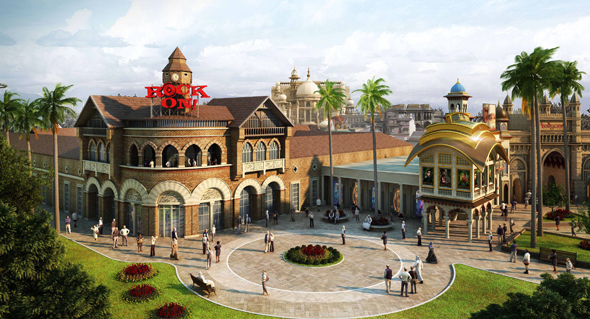 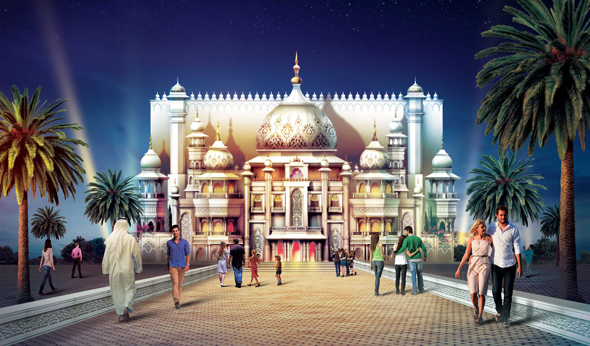 – The centrepiece of this zone is definitely the 850-seat Rajmahal Theatre, which will host a separately ticketed Broadway-style Bollywood musical several times a week, the first of its kind in the region. The show is sure to be a ‘spectacular’ considering the stage itself lifts and revolves. There are even Royal Boxes for VIPs to watch the show from (of course).

– The Mughal-e-Azam restaurant next to the theatre is all about royal ‘shahi’ cuisine as inspired by Bollywood classics (below).

– During the day the zone is all about the Stars on Steps Stage which has a looping performance that pays tribute to the eras of Bollywood. 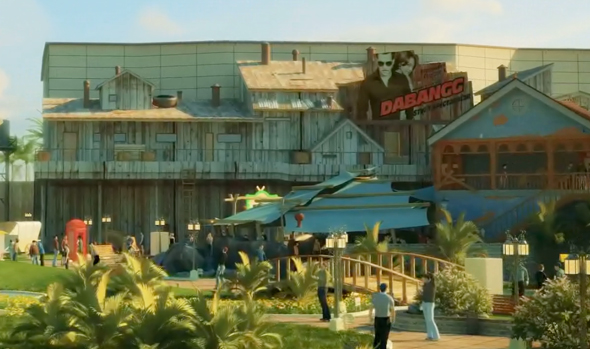 – This stage showcases amazing stuntmen doing what they do best, all themed around the Bollywood mega hit action movie Dabangg.

– This area takes you behind the scenes on a film, showing you how they’re made, and you’ll be able to plant yourself in Bollywood movies – from running with the bulls to flying and posing with Bollywood actresses. 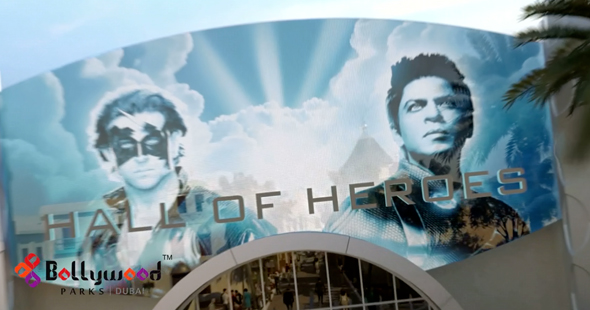 – The zone’s main attraction is the Hall of Heroes that features rides dedicated to Bollywood’s biggest characters. You can join Krrish (aka Hrithik) as he saves Mumbai – this will be a panoramic flying attraction. Or you can join SRK on the RA.One Unleashed ride, a 4D theatre experience that’s all about good vs evil.

– The zone also has Cinema Circle for kids – a stage dedicated to the best children’s songs of Bollywood. 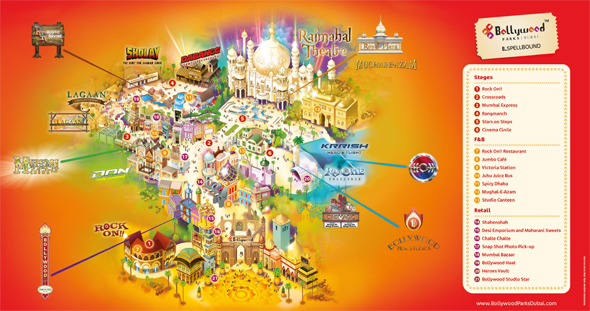 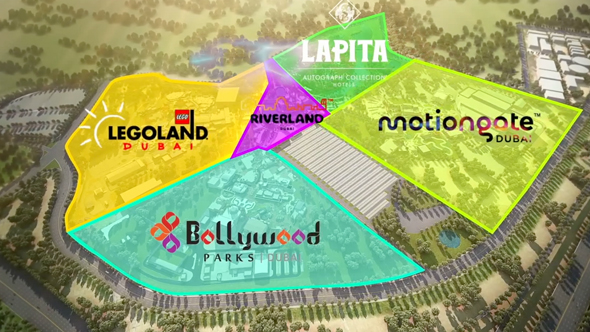 And here’s a video that shows how much movie magic went into the theme park:

Culture
Film
News
Things to do
EDITOR’S PICKS
Ain Dubai will open with fireworks, live music and a drone show
READ MORE
Incredible Aura SkyPool to open in Palm Tower this November
READ MORE
Brit Grand Slam hero Emma Raducanu confirmed for Mubadala Tennis
READ MORE
What’s On Nightlife Awards 2021: Here are the nominees...
READ MORE
MOST POPULAR
DIFC Art Nights is returning in November for a second time this year
10 of the best Halloween brunches to book in Dubai
Sheikh Hamdan has been spotted dining at DIFC's newest restaurant
6 great things to do in Dubai this week: October 17 to 20
Laguna Waterpark launches a week of family fun with free BBQ
YOU SHOULD CHECK OUT
Our website uses cookies and other similar technologies to improve our site and your online experience. By continuing to use our website you consent to cookies being used. Read our privacy policy here.