An interview with the cast of Les Miserables in Dubai

An interview with the cast and producers of Les Misérables, with John Owen-Jones, Hayden Tee and Jodie Prenger.

On November 10, Dubai Opera fulfilled its promise to deliver a West End musical to the city. And boy did it do that with gusto.

The world’s longest running show Les Misérables tells the story of the prisoner Jean Valjean who tries to start his life anew. With its tale of love and heartbreak, Les Misérables has moved millions of audiences since the first show in London in 1985, and is impressing Dubai audiences as well.

A few of the team from What’s On went down last week. Our thoughts? This is a class show, with fantastic set design, beautiful voices and we think John Owen-Jones is the best Jean Valjean we’ve ever seen. (Even the musical-theatre cynic among us enjoyed it.)

If you were an audience member, where would you say is the best seat in the house?
Hayden Tee, Javert

“A few days into rehearsals, I asked to go to the top of theatre, because, you know, I spend a lot of time looking up in the show, talking to God and talking to the stars, and I’d like to see how far I need to look up and where I should project my story. But you know what? I don’t think there is a bad seat in this house. This theatre is designed so beautifully that wherever you sit is amazing. Obviously get up close if you want to feel real emotion, but if you want a bird’s eye view I’d go for the royal circle, or the boxes, they’re great too. You know what, come and sit everywhere!”

“It opens this show to a part of the world that it has never played in. The most important thing is to understand how this audience will react. Of course we know that Les Miserables is a universal story with universal appeal but even Victor Hugo (author of Les Mis) would never have known how this region would react to it, and that is particularly exciting to see. That’s why we’re here.”

Is this your first time to Dubai? What are your first impressions?
John Owen-Jones, Jean Valjean

“This is my second visit, but I was here in 2000 performing with the English Shakespeare Company and there was no theatre to perform in so we were performing in ballrooms around the city. None of this (pointing to Burj Khalifa, outside) was here. You can imagine my delight to see what has happened to this place! It’s incredible being back.”

How do you feel about being one of the first to tread the boards of Dubai Opera?
John Owen-Jones, Jean Valjean

“It’s amazing! I mean what a privilege. With a place like this, there are always teething problems but there’s hardly been any here, it’s all been really well planned. The sound inside the auditorium is incredible – it’s really an amazing venue. The location in the shadow of Burj Khalifa is unbelievable. So if you don’t like the show just stand outside.”

How have the audiences in Dubai reacted to the show?
John Owen-Jones, Jean Valjean

“We didn’t quite know what to expect. With so many rehearsals, we were desperate for an audience. But there was cheering and standing ovations. For many people in the audience it’s the first time they are hearing it and enjoying the music and that is really refreshing.” 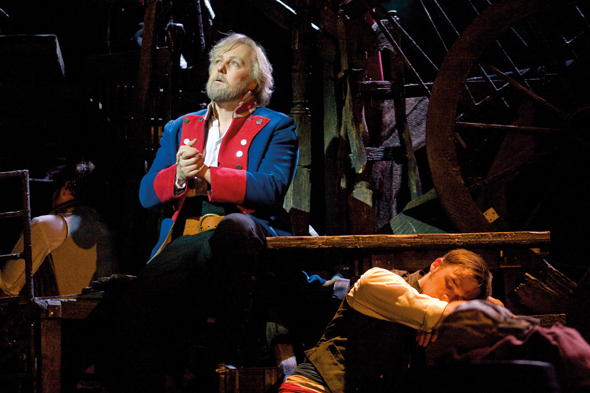 Do you have a favourite scene to perform or a song to sing?
John Owen-Jones, Jean Valjean

“Yes it’s Valjean’s confession in Act II, where he tells Marius who he really is. He’s been hiding this lie all his life and finally unburdens this and then (SPOILER ALERT) goes and dies. It’s my favourite part to perform because the whole show builds up to this point where I’m like a pressure cooker and finally I’m able to release it. I also get to do ‘old man’ acting which I enjoy!”

What a fab show tonight! Audience was wonderful! On the bus to the partaaaaaay! #lesmisdubai

You’ve performed around the world, how is it performing in Dubai?
Jodie Prenger, Madame Thénardier

“It’s quite special isn’t to be part of this? I think that was echoed in the rehearsal room. Everyone in the cast and crew feel very lucky to be united. I didn’t know what to expect from the audiences here, but I have been really humbled by the reactions of the audience because they have been up on their feet, standing ovations and for actors that’s just what we want!! But really, it’s a beautiful story, with beautiful music. It’s the stuff that makes you get gooseys.”

“On a personal I’ve come back to the show. I performed in the original production in 1985 and coming back to it now is so special for me. It’s a part of my formative years as an actor. It still makes the hairs on the back of my neck stand up. These tunes really mean something to me.”

Can you tell us how you adapted the show for the 25th anniversary of Les Misérables and how you’ve adapted the production to the stage at Dubai Opera?
Claude-Michel Schönberg, Composer

“First of all the change for the anniversary has nothing to do with the score. It’s mainly the set, the lights and the staging. But our part (pointing to the French text author Alain) was completed 30 years ago. Of course we were anxious about working in a new auditorium –  it’s a beautiful auditorium – and we had to work with the people from sound, but we were confident. The width of this stage is very wide – it’s amazing. This new production adapts even better to this stage and this kind of huge theatre makes this production really exciting for us.”

A special message from Monsieur Thénardier and Madame Thénardier. We can’t wait to have #LesMisDubai cast here! #CountDown #12Days to go. Have you booked your tickets yet? #DubaiOpera

Culture
Theatre
EDITOR’S PICKS
Ain Dubai will open with fireworks, live music and a drone show
READ MORE
Incredible Aura SkyPool to open in Palm Tower this November
READ MORE
Brit Grand Slam hero Emma Raducanu confirmed for Mubadala Tennis
READ MORE
What’s On Nightlife Awards 2021: Here are the nominees...
READ MORE
MOST POPULAR
The most up to date information for entering Abu Dhabi: Oct 2021
First look: Instagram breaking 2D cafe, Forever Rose opens in Yas Mall
Emirates warns passengers to arrive early to DXB airport this weekend
Pics of the week: Your best photos of the UAE
Take a look inside the brand new Madame Tussauds Dubai
YOU SHOULD CHECK OUT
Our website uses cookies and other similar technologies to improve our site and your online experience. By continuing to use our website you consent to cookies being used. Read our privacy policy here.