Hit musical West Side Story is coming to Dubai Opera

Something’s coming, something good if you can wait…

Valentine’s Day is set to be extra special next year thanks to Dubai Opera, which is bringing 1950s America to the Middle East with West Side Story.

The Tony Award-winning musical will show at the soon-to-open venue from February 14 to 18, and tickets have literally just gone on sale.

The musical explores the growing animosity between street crews the Jets and the Sharks, all while the classic case of boy meets girl plays out… and yes, you’d still call it a tragedy. 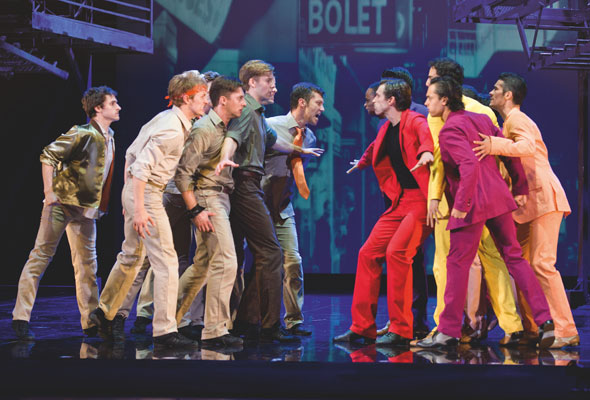 Based on the novel by Arthur Laurent, the Broadway production first opened in 1957, swiftly followed by an Academy Award-winning film version, starring Natalie Wood and Rita Moreno, in 1961.

Its most famous songs include America, Maria, Tonight and I Feel Pretty, and the dance numbers are pretty spectacular too.

The Dubai version will feature a cast of 36 under the direction of Joey McKneely, but there’s still the original choreography and tunes you know and love.

“West Side Story is an iconic musical, and one that has been loved the world over for more than 50 years,” said Jaspar Hope, Chief Executive of Dubai Opera. “It’s fantastic to be able to bring this incredible production for the first time ever to the GCC and to introduce this timeless classic to an entirely new audience.”

You might want to get in quick if you want to meet a girl named Maria, though – tickets for Placido Domingo at Dubai Opera sold out almost instantly.

The 2000-seat venue, set to open its doors in August, is also bringing the world’s longest-running musical, Les Miserables, to the UAE later this year.

Tickets are available from 3.30pm on July 13 from Dubai Opera.

Culture
News
Theatre
Things to do
EDITOR’S PICKS
UAE holiday dates announced for National Day
READ MORE
Emirates Dubai 7s is back: Here's why we're excited...
READ MORE
Tennis ace Andy Murray to play at Mubadala World Tennis Championship
READ MORE
UAE 50: Where to watch National Day fireworks in Dubai
READ MORE
MOST POPULAR
UAE confirms its first case of the Omicron variant
Alhosn Green Pass to only be valid for 14 days after negative PCR
20 of the best things to do in Abu Dhabi this long weekend: Part 2
First look: London-loved restaurant The Cinnamon Club opens in Dubai
Check out this amazing display at the world's highest outdoor infinity pool
YOU SHOULD CHECK OUT
Our website uses cookies and other similar technologies to improve our site and your online experience. By continuing to use our website you consent to cookies being used. Read our privacy policy here.