Thought you knew how to bypass speed cameras? Think again...

Thought you were being sneaky by slowing down past speed cameras, only to speed up afterwards? Well, we’ve got some bad news for you (but some good news for road safety).

The Dubai Traffic Police have released an updated version of their radars, which will detect drivers who speed on the roads between speed cameras.

How? By calculating the average speed of the car between the two speed cameras.

To break it down – radar one tags your car, so that radar two can calculate the amount of time it took your car to get to it. 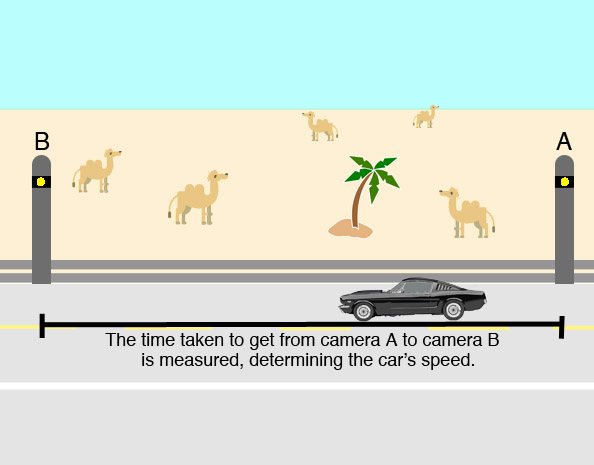 Got there a little too quick? Then you must have been speeding between the two cameras.

It hasn’t yet been mentioned when exactly the radars will be implemented, however Brigadier Saif Muhair Al Mazroui, director of the Dubai Traffic Police has been testing them out on the Dubai to Hatta road.

“This enforcement solution has been proven to be very effective.

“As the vehicle’s speed is monitored throughout, speeding between cameras will no longer be an issue, which will ensure smoother traffic flow.”

WAIT… HOW MANY TYPES OF CAMERA ARE THERE NOW?

Well, there are the cameras in Dubai, dubbed the Al Burj cameras that can spot you on your mobile phone.

Oh, and they can also nab you for seatbelt offenses. Tailgating too – even illegal overtaking, tailgating and driving on hard shoulders.

“But we still see people doing it!” we hear you say.

Yeah, some people aren’t bothered about the cameras.

That’s not to say they don’t work. Since being installed, the Al Burj radars caught around 50,000 violators in 2015 alone.

Just try to make sure you’re not one of them…

News
Transport
EDITOR’S PICKS
UAE holiday dates announced for Eid Al Adha
READ MORE
Emirates extends suspension of flights from India to UAE again
READ MORE
Coming soon: Everything we know about Ain Dubai so far
READ MORE
Khorfakkan set to open new tourist attraction 580 metres above sea level
READ MORE
MOST POPULAR
A completely spoiler-free movie review of The Suicide Squad
Review: It's chilled vibes all the way at Jumeirah Islands Clubhouse
Review: Carna Dubai, a vibrant steakhouse 74-storeys high
Pics of the week: Your best photos of the UAE
New films to watch in cinemas this week: August 5 to 11
YOU SHOULD CHECK OUT
Our website uses cookies and other similar technologies to improve our site and your online experience. By continuing to use our website you consent to cookies being used. Read our privacy policy here.