Quinoa: The superfood that could feed the UAE in the future...

Quinoa’s called a superfood for a reason.

Not only is it super-high in both protein and fibre, the little seed called quinoa may be the thing to save us from a future food shortage in the UAE according to experts.

Yesterday, more than 150 leaders, policymakers, scientists, experts and professionals from over 46 countries came together at Zayed University in Dubai to share the latest developments in quinoa research, production and trade worldwide.

Why should I care, you ask? Well this meeting is all about how quinoa could be successfully cultivated in countries affected by water scarcity and salinity (and the UAE is one of them).

WAIT, SO HOW WILL QUINOA SAVE THE UAE?

By 2050, the world’s population is expected to be around 9.7 billion, and there are concerns for the capacity of agriculture to produce enough food.

More…
*Food trends we love & hate: The highs and lows of Dubai’s food scene*
*Taking dinner with a view to a whole new level*

This makes it tough for regions already plagued by malnutrition, water scarcity and soil degradation, and those who are forecasted to have a large population growth. 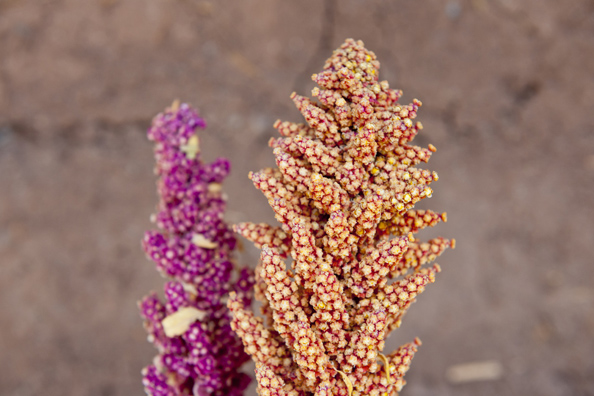 A quinoa plant growing in the Peruvian salt flats. Who knew that’s what they looked like?

Speaking at the conference, Dr. Thani Ahmed Al Zeyoudi, Minister of Climate Change and Environment of the UAE said, “Climate change poses one of the greatest threats to humanity. Countries that already suffer from droughts, water shortages and salinity are at an even greater risk,” WAM reports.

“We urgently need to find solutions and adapt and where possible mitigate the effects of climate change on different fronts, including agriculture.

“Quinoa can play a major role as a staple crop in marginal environments due to its adaptability to harsh environments including poor saline soils with annual rainfall as little as 200mm.”

The UAE receives on average around 93mm of rainfall per year.

Such a rapidly-growing population will breed the need for more food – and if quinoa’s as bountiful in arid lands as the experts suggest, then this small seed could come as a saviour to any future food crises.

Eat & Drink
News
Well-being
EDITOR’S PICKS
UAE holiday dates announced for Eid Al Adha
READ MORE
Emirates extends suspension of flights from India to UAE again
READ MORE
Coming soon: Everything we know about Ain Dubai so far
READ MORE
Khorfakkan set to open new tourist attraction 580 metres above sea level
READ MORE
MOST POPULAR
Flash sale: Enjoy 40 per cent off at Address Beach Resort
Get 20 per cent off at Dubai's only licensed nail salon this summer
It's back! What's On Lock In heads to Crowne Plaza Dubai Jumeirah in September
7 of the most surprising bargains, adventures and discounts of this DSS
Gents' night launches at Ski Dubai with food and drinks
YOU SHOULD CHECK OUT
Our website uses cookies and other similar technologies to improve our site and your online experience. By continuing to use our website you consent to cookies being used. Read our privacy policy here.