Want to party with Lindsay Lohan this NYE? Here's how...

As far as A-list parties in Dubai go, this one’s right up there…

It’s been just over a week since we told you that Lindsay Lohan looks to have moved to Dubai, and now it seems she’s taking her love of the emirate to a new level – by hosting a New Year’s Eve party here.

The former Mean Girls actress, who’s said to be currently based in the city (and is even learning Arabic), will be fronting Zero Gravity’s huge NYE bash on December 31, it has just been announced.

It’s set to be one of the hottest tickets of the night, with Chase & Status and 2ManyDjs also on the line-up at the Dubai Marina venue.

‘Li-Lo’ will apparently be taking to the stage just before midnight to lead the countdown to 2017.

The Hollywood star is no stranger to the venue either – in fact, the actress was spotted partying at Zero Gravity earlier this month during their One Big Friday event.

READ MORE
*Lindsay Lohan lives in Dubai now?*
*Six New Year’s Eve parties in Dubai…*
*27 things to do over the next week in Dubai*

She’s also been posting Instagram snaps of her hanging out with Dubai One TV presenter Dina Butti and lifestyle blogger Karen Wazen Bakhazi.

Was amazing to get to actually sit and talk to the beautiful @lindsaylohan who’s currently based IN DUBAI!!! She’s got a number of projects lined up, including some pretty awesome charitable initiatives ❤️ Welcome to Dubai Lindsay.. And, of course, thank you to @ahlanmagazine for the Christmas bash! ?? #watchthisspace #holidayspirit

The 30-year-old also shared a snap of herself with local make up artist and businesswoman Joelle Mardinian of Maison de Joelle.

So, fancy rubbing shoulders with the A-lister?

The VIP package (Dhs999) for the party will get you upper deck access and unlimited food and drink from 8pm to midnight, including bubbles to help you toast the New Year. 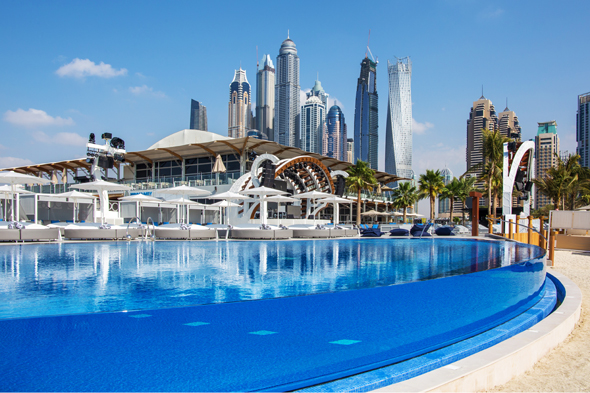 Alternatively, make the most of Dubai’s winter sun with beach and pool access (Dhs250), although you have to arrive by 4pm.

Regular entry costs Dhs275 in advance and Dhs375 on the door. Sold? You can find tickets at platinumlist.net.

Or if that’s not your scene, check out our list of six other NYE bashes in the city…

Clubs
News
Nightlife
Things to do
EDITOR’S PICKS
What’s On Nightlife Awards 2021: Here are the nominees...
READ MORE
It's back! What's On Lock In returns to Media One Hotel
READ MORE
Arts and culture: 5 spots we can't wait to visit at Expo 2020 Dubai
READ MORE
UAE petrol prices are set to decrease in September 2021
READ MORE
MOST POPULAR
Abu Dhabi: Wristband no longer required for most home quarantine
As of September 19, PCR test not required to enter Abu Dhabi from UAE
This new family-friendly brunch includes free cinema tickets
Pics of the week: Your best photos of the UAE
How to use Playkey.me, the region's first supercharged cloud gaming service
YOU SHOULD CHECK OUT
Our website uses cookies and other similar technologies to improve our site and your online experience. By continuing to use our website you consent to cookies being used. Read our privacy policy here.