The tennis legends warmed up on the beach before the men’s singles tournament of the Dubai Duty Free Tennis Championships.

ATP world number one Andy Murray and seven-time Dubai champion Roger Federer are back in Dubai for the 25th anniversary of the Dubai Duty Free Championships, and they took some time out from practice for an impromptu match on the beach facing the iconic Burj Al Arab at the Jumeirah Al Naseem hotel.

‘I thought we could have a quick warm up match,’ says Federer to his tennis rival.

‘Sure, what better place to do it?’ smiles Murray.

And so ensues the most leisurely game of tennis these two have ever played against each other. Eventually Federer shows off his beach paddle tennis finesse and secures victory at the shoreline.

Still, nothing will ever be as iconic as this match…

BUT NOW FOR REAL TENNIS…

Remember though, it’s not all fun and games for these lads in the emirates. They’re back to battle it out at the 25th anniversary of the Dubai Duty Free Tennis Championships.

Murray and Federer haven’t played since the Australian Open, which saw Federer win his 18th Grand Slam title in spectacular style. With Tournament Director Salah Tahlak on hand to umpire, the beach seemed the perfect place to warm up for the ATP Tournament which kicks off on Monday 27 February.

Plus, Murray and Federer are in the same side of the draw, and so are very likely to face off again… 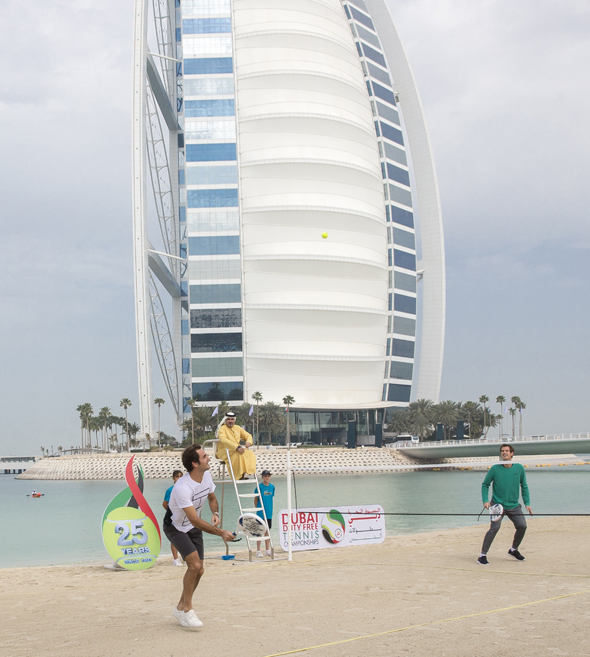 Ahead of the Dubai Duty Free Tennis Championships, What’s On chatted to World No 1 Andy Murray, about his love for the tournament:

‘The tournament itself is very convenient,’ says Murray, ‘they also treat the players unbelievably well, we all have our very own dedicated concierge who are on hand to help us with anything we need, which you don’t get at tournaments. The courts are always in great condition, and always play really well. The sun is usually shining as well, which helps.’

Tickets are still available from the Box Office at the Dubai Tennis Stadium, Garhoud which opens from 9am to 9pm daily.

News
EDITOR’S PICKS
UAE holiday dates announced for Eid Al Adha
READ MORE
Another update: Emirates extends suspension of flights from India to UAE
READ MORE
Coming soon: Everything we know about Ain Dubai so far
READ MORE
Khorfakkan set to open new tourist attraction 580 metres above sea level
READ MORE
MOST POPULAR
It's Dhs350 to brunch, stay and play at the What's On Lock In this weekend
Abu Dhabi Green list updates: 20 changes to the quarantine free travel list
Barasti revamps its summer tent with stellar daily drinks deals
Enjoy dinner and a show 68 floors high in Dubai
New films to watch in cinemas this week: July 29 to August 4
16 Abu Dhabi pool pass deals that are so hot, they're cool
YOU SHOULD CHECK OUT
Our website uses cookies and other similar technologies to improve our site and your online experience. By continuing to use our website you consent to cookies being used. Read our privacy policy here.